Back in 2013, when the C7 Corvette was brand new, Hennessey Performance Engineering took a slightly modified example of the then-new sports coupe and hit a top speed of 200.6 mph on a closed Texas toll road. The company has now decided to do the same to promote its new tuning program for the Corvette C8, testing the top speed of a Hennessey modified 2020 Corvette Stingray at Continental Tire Proving Grounds in Uvalde, Texas. 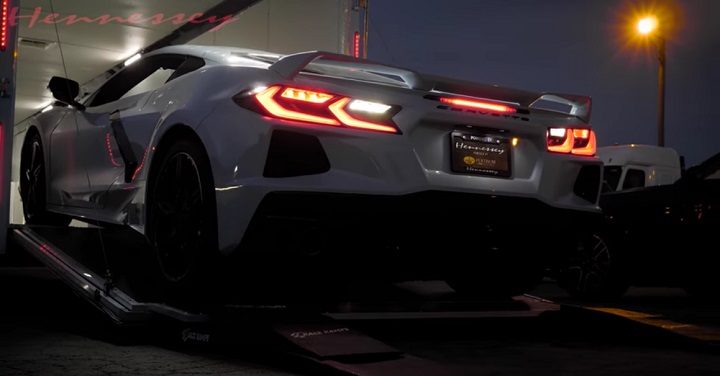 The car in question, an Arctic White 2020 Corvette with a Hennessey stainless steel exhaust system and a 135-horsepower Nitrous Express system, managed to hit 205 mph on a highway-like road at the private proving grounds. Behind the wheel of the specially prepared Vette was longtime GM development driver John Heinricy, who was responsible for turning in some impressive Nurburgring Nordschleife lap times in GM equipment. 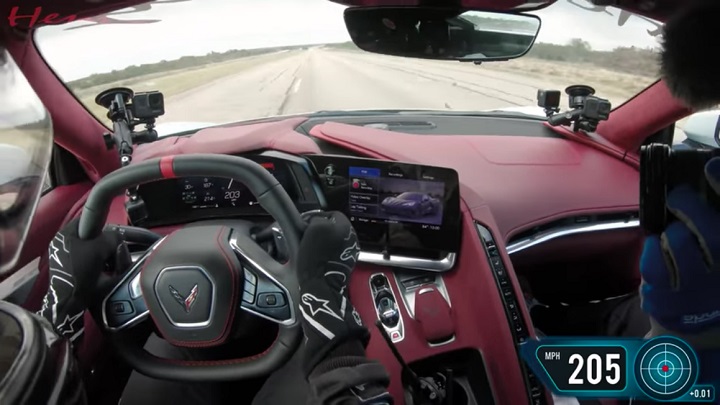 Hennessey says the car hit a VBox-confirmed top speed of 205.1 mph during the run, becoming the first C8 Corvette to break the 200-mph barrier in the process. The stock Corvette C8 can hit a top speed of 194 mph, but the Arctic White example in the video came equipped with the Z51 performance package, which includes a front splitter and rear wing. The drag from the splitter and wing drops the stock vehicle’s top speed from 194 mph to 184 mph, so it made sense for Hennessey to remove the rear wing for this test.

Hennessey has already experimented with a twin-turbocharged setup on the 2020 Corvette C8 and its 6.2L V8 LT2 engine, but with the vehicle’s ECU still under GM’s encoded lock and key, tuning companies are unable to adjust the mid-engine Corvette’s air-fuel mixture. This means the advantages of using forced induction and applying other upgrades are minimal at the moment, though rest assured aftermarket companies are trying their hardest to crack the vehicle’s electronic brains.