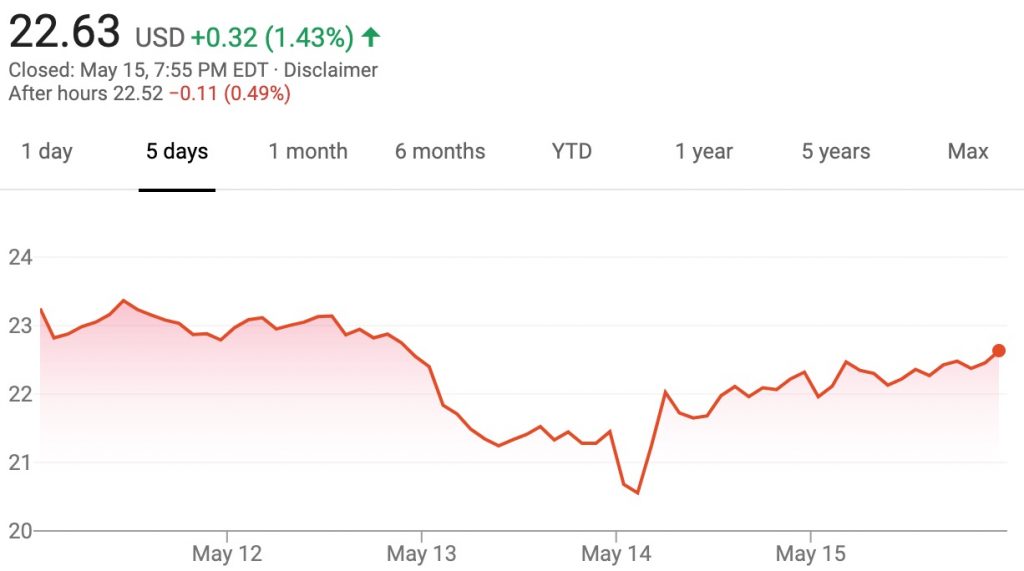 By comparison, shares of GM’s cross-town rival, the Ford Motor Company, decreased $0.34 per share, or over 6 percent, during the same timeframe.

While it’s not surprising, this week’s drop in GM stock value is a bit deflating following last week’s rebound, which in turn came after three consecutive weeks of declines. The rebound the week before this one was primarily due to two factors reported that week:

However, the decline in GM stock values this week reflects a lack of investor confidence that everything will go back to normal once production does resume. Indeed, the ongoing COVID-19 outbreak has caused significant amounts of negative disruption and instability for GM as well as for other automakers. As a result, GM stock has shed roughly half of its value so far this year – as it opened the year at $37.38 per share. The significant decline is believed to be a direct result of idled production in North America as a result of the pandemic.

The coronavirus pandemic initially forced GM to idle production across North America, South America and China as a result of the virus, putting the firm in a very unfavorable position. During such a scenario, an automaker sees revenues fall sharply while rapidly burning through cash, resulting in a loss-making turn of events. Since the beginning of the pandemic, GM production in China has resumed while production across North America will resume on May 18th, as we mentioned previously.

It’s worth noting that GM share values were experiencing ongoing ups and down since mid-2018, long before coronavirus complications, though shares never dipped to the levels observed in the first quarter of 2020.

We remain interested in seeing how GM stock performs through the summer of 2020, especially following the COVID-19 crisis. The refresh of many 2021 models will be delayed, including the Cadillac XT4, Chevrolet Traverse, Chevrolet Equinox, GMC Terrain, and Chevrolet Bolt EV. In fact, the overall roll-out plan for most GM products has been pushed back, which also includes the launch of the Cadillac CT4-V Blackwing and CT5-V Blackwing models.

That said, there are still some good things happening for GM in 2020, including a 27 percent growth in Silverado sales during Q1 2020 and strong Chevrolet Blazer sales. The retooling of the GM Arlington assembly plant in Texas is under way, and the company’s redesigned line of full-size SUVs will start shipping in June.