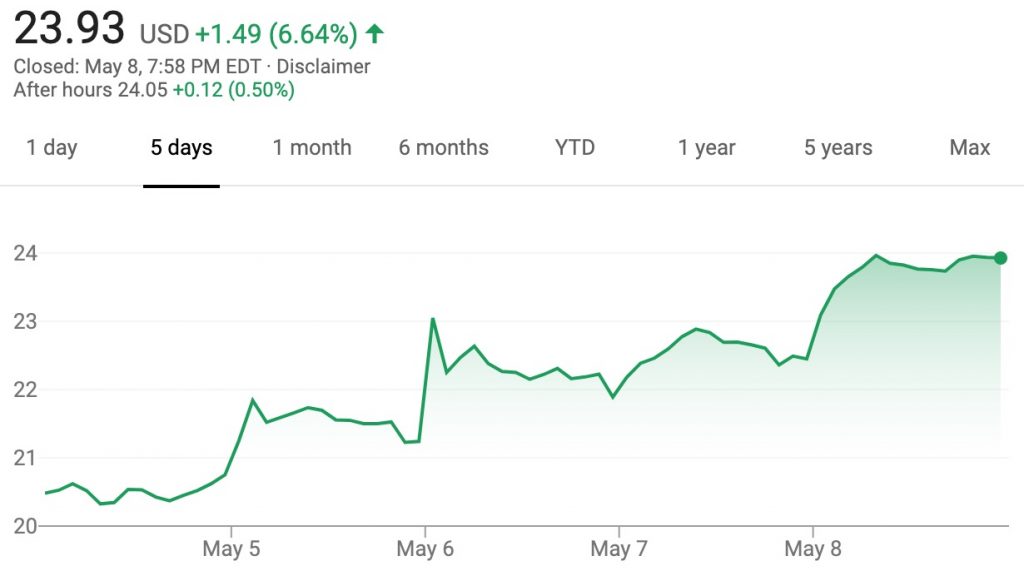 By comparison, shares of GM’s cross-town rival, the Ford Motor Company, increased $0.32 per share, or 7 percent, this week.

This week’s rebound in GM stock value is the first increase after three consecutive weeks of decline. The biggest reason explaining this upward movement was the company surprising the entire analyst community with a first quarter profit, which was announced during GM’s Q1 2020 earnings presentation held last week. In addition, several U.S. assembly plants are scheduled to restart production on May 18th, which is also good news for GM.

Due to complications caused by the ongoing COVID-19 outbreak, many analysts predicted that things would continue to get worse before they get better. We posited that the recovery from February’s blow had been reassuring off the cuff, and the rather significant growth of 15 percent seems to be another step in the right direction. That said, the marketplace remains unstable, meaning investors aren’t in the clear yet.

For its part, GM drew down $16 billion in credit while keeping its dividend to cope with impacts of the virus. The General also faces the possibility of a downgraded credit rating. While GM no longer releases sales results on a monthly basis, some analysts believe that auto sales in the United States could have dropped by more than 50 percent. While the issue of whether investors should buy or sell GM stock remains a divided topic, Greenlight Capital has just recently decided to remove General Motors from its investment portfolio.

It’s worth noting that GM share values were experiencing this continued ebb and flow since mid-2018, long before coronavirus complications, though shares never dipped to the levels observed in the first quarter of 2020, which have at least since stabilized.

Seeking to further streamline its activities in unprofitable markets, General Motors also announced its intention to phase out the Holden brand in Australia and New Zealand, in addition to pulling the Chevrolet brand out of Thailand and selling its Rayong assembly plant to Great Wall Motors. In addition, GM recently announced its decision to shut down its Maven car-sharing service.

We remain interested in seeing how GM stock performs through the summer of 2020, especially following the COVID-19 crisis. The refresh of many 2021 models will be delayed, including the Cadillac XT4, Chevrolet Traverse, Chevrolet Equinox, GMC Terrain, and Chevrolet Bolt EV. In fact, the overall roll-out plan for most GM products has been pushed back, which also includes the launch of the Cadillac CT4-V Blackwing and CT5-V Blackwing models. It could also prevent 2020 Corvette production from resuming later this month.

That said, there are still some good things happening for GM in 2020, including a 27 percent growth in Silverado sales, and strong Chevrolet Blazer sales. The retooling of the GM Arlington assembly plant in Texas in under way, and the company’s redesigned line of full-size SUVs will start shipping in June. The General is also playing its part in combating the negative impacts of the coronavirus on the country as a whole.