Here at GM Authority, we love featuring all sorts of modified cars, trucks and SUVs. We run articles on a wide variety of tastefully modified vehicles that debut at shows like SEMA or pop up for sale at dealerships or auctions, but our new ‘Awful General Motors Car Mods’ series will look to shine a light on some of the worst custom cars from around the internet. We don’t want to hurt anyone’s feelings and realize that not everyone’s tastes are the same, so we’ll refrain from being too brutal, but sometimes you stumble across a custom car that is just too absurd not to share.

So without wasting any more time, let’s take a look at some of the worst custom cars we’ve seen over the past 30 days. 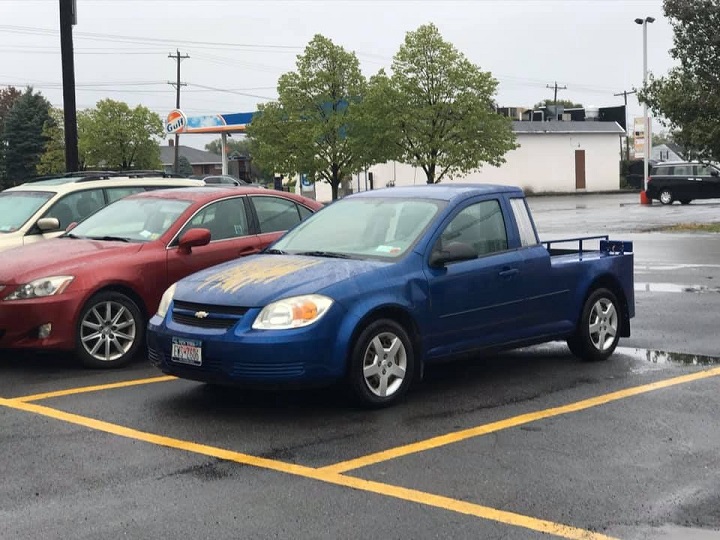 We’ll start things off mild with this Chevrolet Cobalt that has been converted into a pickup truck. To be fair, this modification isn’t so much awful as it is weird. The craftsmanship looks decent, though the pickup bed itself doesn’t look as though it could be used for much, as it appears to be too narrow and shallow. 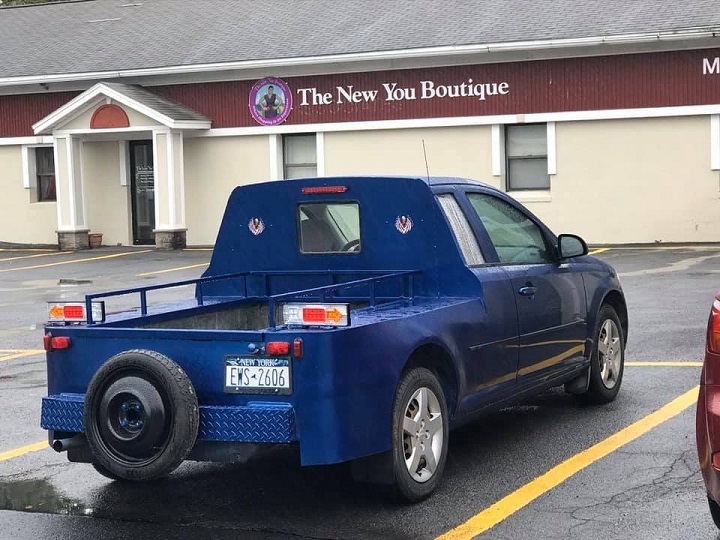 We’re also docking this Cobalt pickup some points for the lack of a tailgate, though we’re glad to see the builder installed some auxiliary brake lights and rear turn signals. Safety first! 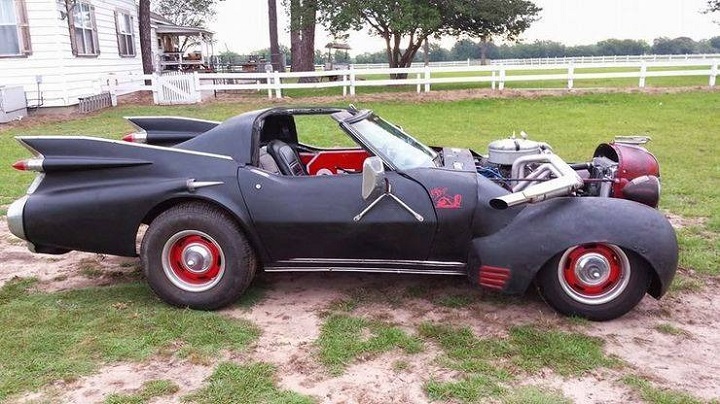 Next up, we have this C3 Corvette-based Batmobile using vintage Cadillac tail fins. We can understand why someone would want to build their own Batmobile out of the C3 Corvette, but the faded matte black paint, truck sideview mirrors and swapped front end just aren’t working here. If Batman showed up in this, we imagine the Joker would just laugh him off. 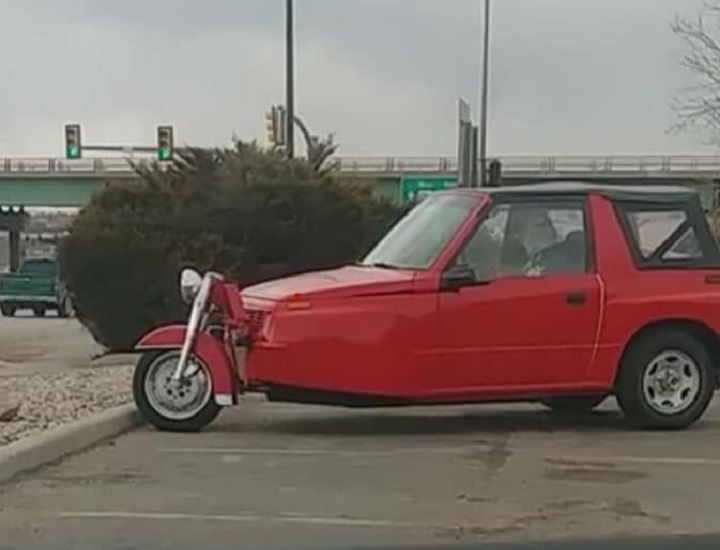 This Geo Tracker tricycle (there’s a combination of words we never thought we’d type) is actually fairly well executed, but we’re not sure why someone would want to build such a thing in the first place. It’s also quite long and looks as though it would have a huge turning radius. To each their own, we suppose. 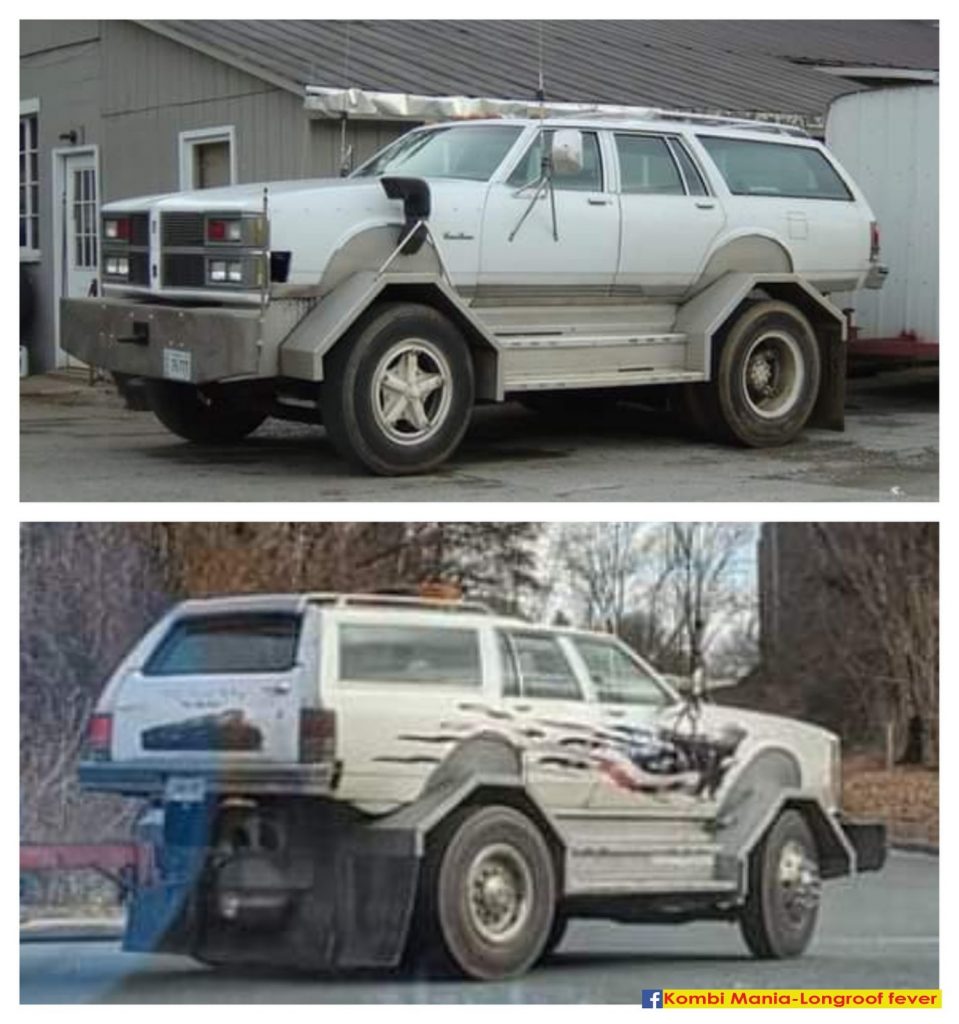 This Oldsmobile Custom Cruiser might just be one of the strangest modified vehicles we’ve ever laid eyes on. There’s a lot going on here, between the medium-duty truck chassis, double front fascia, side-exit snorkel and various other modifications, we’re having trouble pinpointing what to make fun of with this odd build. 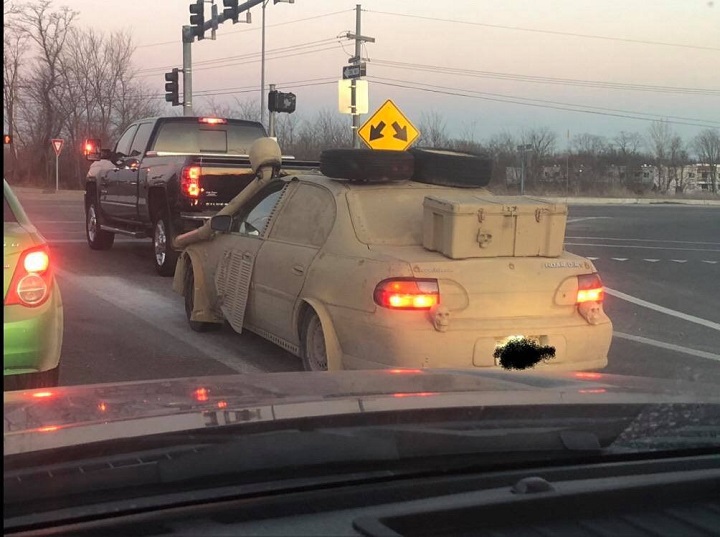 The film Mad Max has served as inspiration for all sorts of mean-looking custom car builds, many of which are undeniably cool. The owner of this Chevrolet Malibu appears to have taken inspiration from the post-apocalyptic film, but to say they missed the mark is an understatement. From the roof-mounted spare tires (which look like they are about to fall off at any moment) to the air conditioning vent tacked onto the door, there’s a lot to laugh at here. And is that a spray-painted tool box mounted to the trunk lid?! 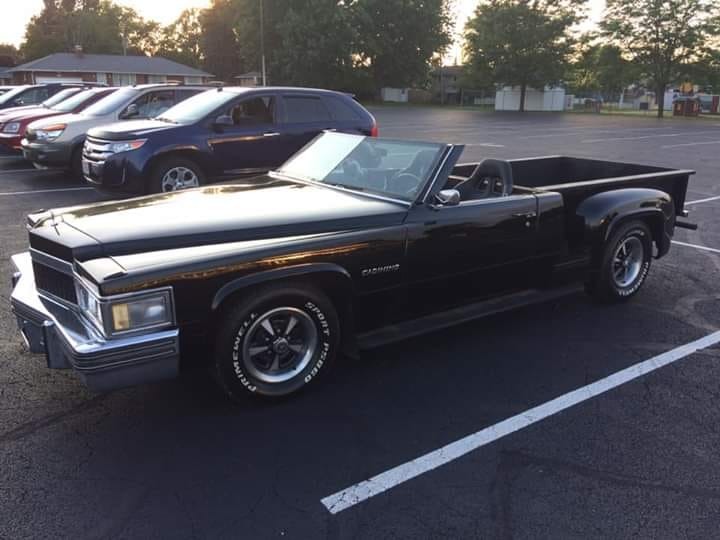 This Cadillac Coupe DeVille pickup isn’t so much “awful,” but just weird. The craftsmanship here is pretty good, we’ll admit, and it’s easy to see what the builder was going for, but we’re not sure it’s really working. We’re willing to give them an A for effort. 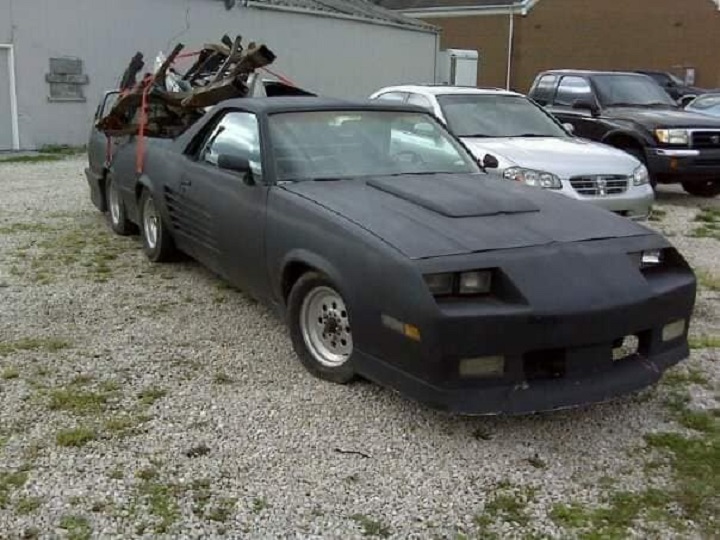 One of the stranger cars we’ll feature in this article is this six-wheeled fifth-generation Chevrolet El Camino. The El Camino was an oddball right from the factory, but the owner of this car turned the weirdness up to 11 with a Camaro front fascia, an additional rear axle and a very long pickup bed. 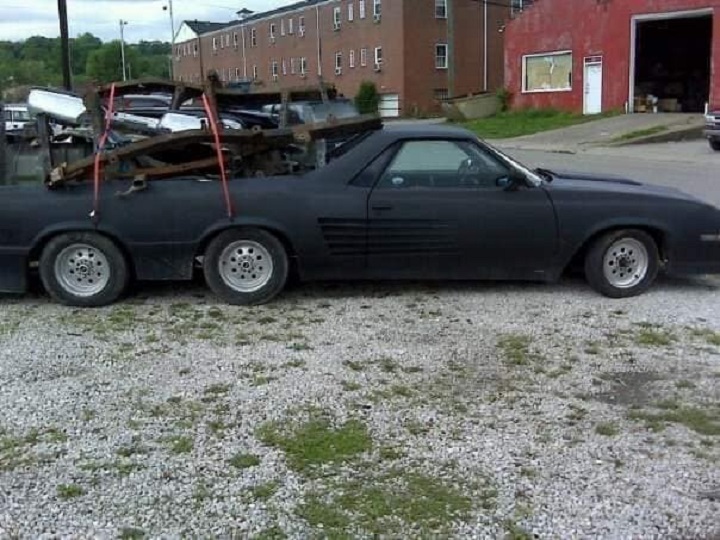 The owner is getting good use out of the elongated bed section, at least, filling it up with scrap metal and rusty old ladder frames. 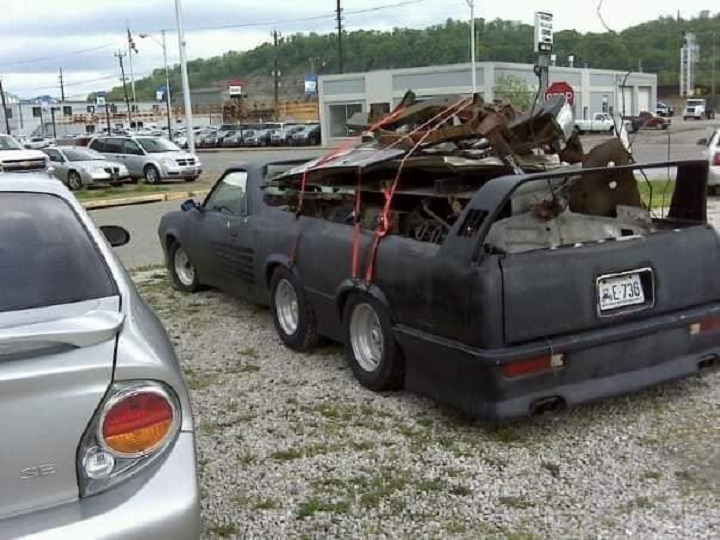 This is exactly the kind of car you see driving down the highway and immediately speed up to get as far away from it as possible – especially if the bed is stacked with junk like this. 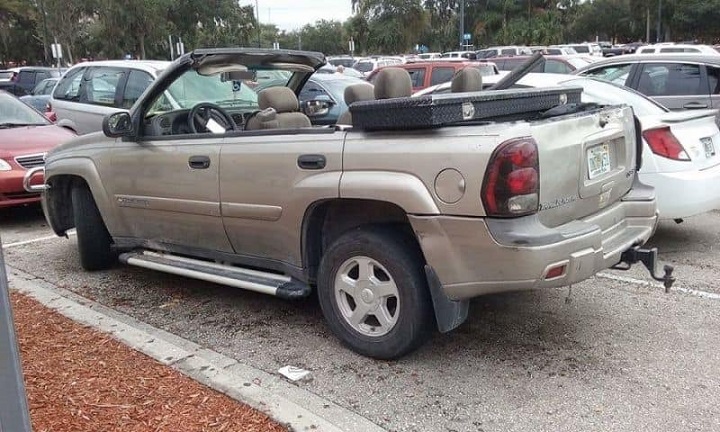 This Chevrolet TrailBlazer convertible conversion is like a really bad take on the Nissan Murano CrossCabriolet or Range Rover Evoque Convertible. It appears as though a custom soft top is stowed away behind the toolbox as well. We’d love to see what this monstrosity looks like with the roof up. 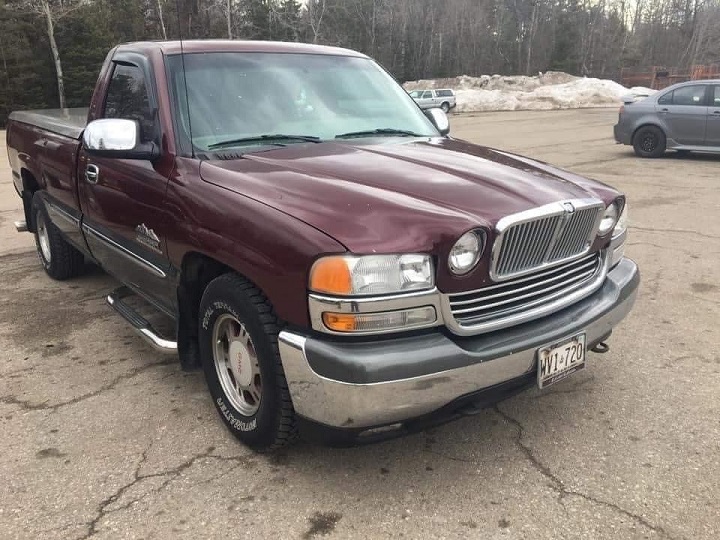 This GMC Sierra two-door appears to have been the unfortunate recipient of a Jaguar XJ6 or XJ12 front fascia swap. We really can’t imagine what went through the owner’s head when making this, but we have to thank them for the laugh. Hey, at least they get two extra headlights! 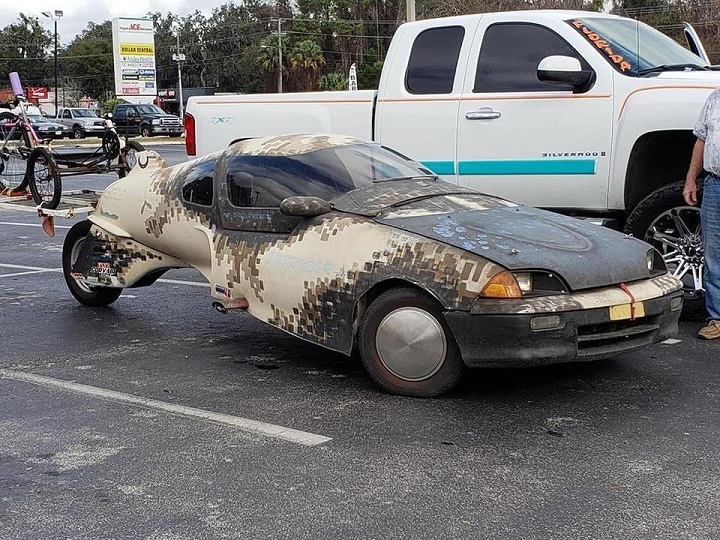 Completing our list is this custom Geo Metro tricycle. This was probably pretty hard to build, to be fair, but the result is something that looks entirely alien. Note the three-wheeled bicycle hanging off the back of it as well. Talk about weird.