In June 2018, a large shipping vessel (ironically named the YM Efficiency) accidentally spilled 81 shipping containers into the ocean as it was en route to Australia. Last week, the Australian government managed to recover some of the containers, which they found sitting on the ocean floor about 15 miles from the New South Wales shore.

The goods in these containers included office chairs, bicycles, tires, household goods and, most notably, two Chevrolet Silverado HD pickup trucks. Not surprisingly, the trucks were in a poor state of repair when they were pulled from the shipping containers. They had been badly damaged from rather significant fall from the large shipping freighter and were saturated with salty ocean water after spending nearly two years on the sea floor.

“Obviously having a free fall for 120-odd meters in the water and then landing on the bottom hasn’t left them in the best shape,” said Scott Wilson, project manager for the Australian Maritime Safety Authority. “All the windows were down in them as well, so they were all full of water and are just rotting.” 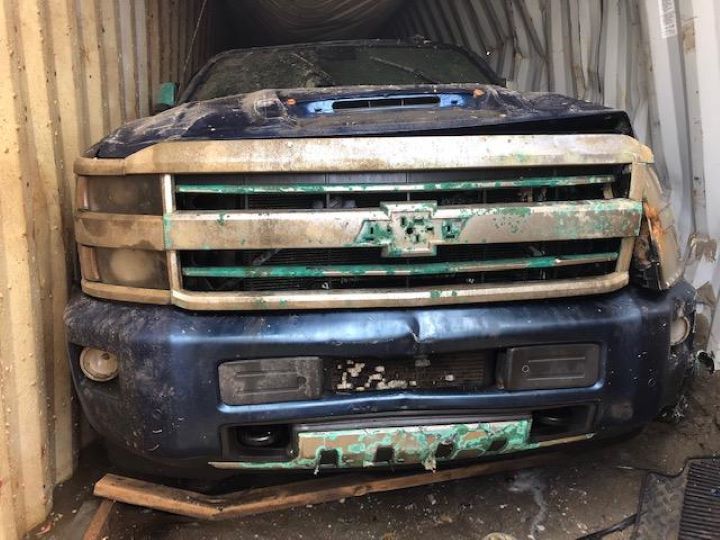 The previous-generation Chevrolet Silverado HDs were likely on their way to Holden Special Vehicles, which converts the trucks to right-hand-drive and sells them locally in Australia. The trucks are worth about $150,000 AUD each, equivalent to just over $95,000 in U.S. dollars.

HSV Silverado HDs feature the 6.6L L5P Duramax diesel engine and Allison 1000 six-speed automatic transmission. Australian customers can order the trucks in either WT (Work Truck) or range-topping LTZ trim. HSV has recently turned its attention to the current-generation Chevrolet Silverado 1500 light-duty trucks and began importing the vehicles into the country in March. Prices for the HSV Silverado 1500 start at roughly $110,000 AUD, which is equivalent to just over $70,000 USD.

AMSA’s container recovery efforts are expected to last until the end of April. It will pull a total of 62 containers out of the ocean before the end of the month. Where the remaining 18 containers have drifted off to is anybody’s guess.