General Motors‘ Milford Proving Ground in Michigan serves as the automaker’s main test and development facility. This massive, 4,000-acre engineering hub is home to all sorts of vehicle testing tools and spaces, from a 4.5-mile banked circle track, various ride and handling loops, a crash test lab and much more.

Milford was the industry’s first-ever dedicated automotive test center when it opened back in 1924. Predictably, the testing facilities and procedures at Milford weren’t always as advanced as they are now, as proven by this vintage Chevrolet testing video from 1961.

This video shows Chevrolet conducting numerous tests on the then-new Chevrolet Corvair, but compared to today’s advanced ride and handling courses and tech-laden crash testing procedures, these development practices are rather archaic. The Corvair is seen being launched off a ramp to demonstrate the strength of its wheels and suspension and being driven into a grass-covered ditch to show its traction on loose surfaces. Engineers are also seen driving the Corvair on a rough, rut-filled dirt road to further demonstrate the robustness of its suspension design.

Not everything has changed with regard to vehicle testing and development, however. Chevrolet also includes clips of the Corvette racing at the 24 Hours of Le Mans in this video. As Many Chevy fans will already know, the Corvette still races at Le Mans and other endurance races to help further the development of its powertrain and chassis. The latest Corvette race car, the C8.R, features the DOHC flat-plane crank V8 engine that will appear in future Corvette performance models, with the engine powering the C8.R to a fourth-place finish at this year’s 24 Hours of Daytona. 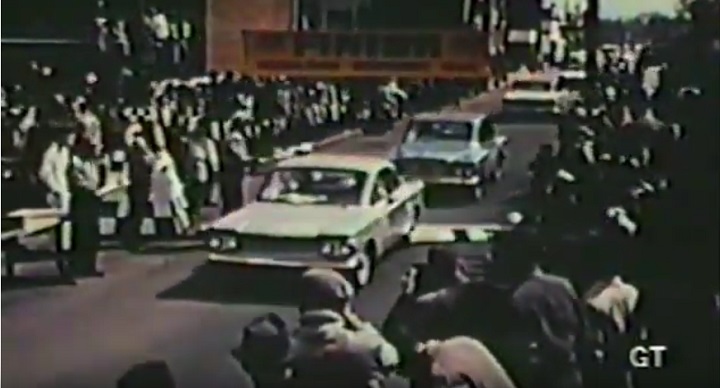 The video ends by showing a Chevrolet Corvair completing the 2,000-mile Mobil economy run event, which was held from 1936 to 1968 (except during World War II) and challenged participants to eek as much range out of their passenger vehicles as possible.

Check out the video embedded below for a complete look at how Chevy used to test its vehicles in the early 1960s.