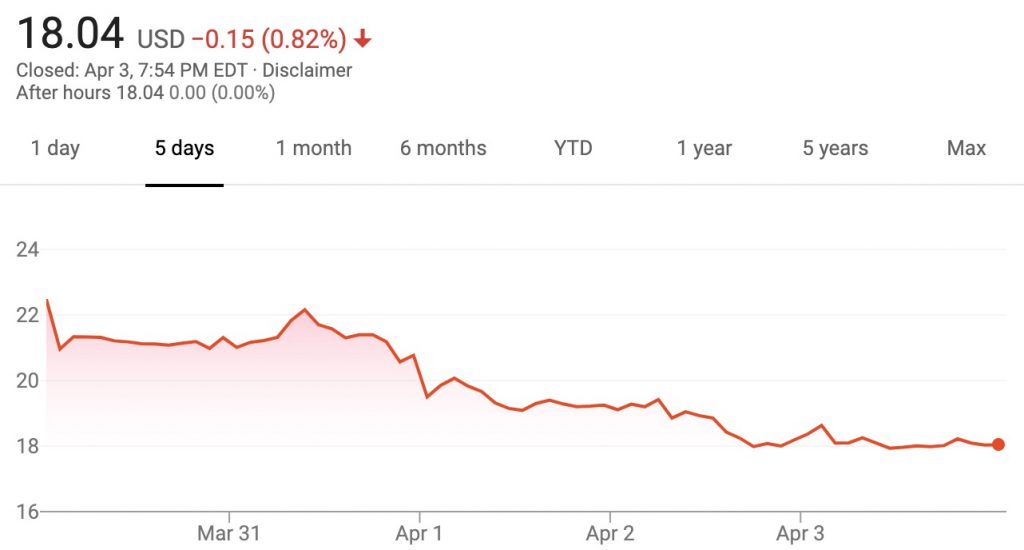 The drop in GM stock value is a bit deflating following last week’s rebound, though not unexpected as it is a rather chaotic time in the market space due to the Coronavirus pandemic. Before Coronavirus complications, GM share values experienced a continued ebb and flow since mid-2018, though the performance is ultimately a net loss for GM shareholders.

The impact of the COVID-19 pandemic is not to be understated, as the Big Three domestic auto manufacturers – Ford, FCA, and GM – have ceased production amid the outbreak. That said, there is a notable difference in other key decisions made by the companies. Case in point, Ford reportedly opted to borrow $15.4 billion from its existing credit lines and suspend its dividend, while GM stayed the course.

By comparison, shares of GM’s cross-town rival, the Ford Motor Company, decreased $0.95 per share, or 18 percent, this week.

We remain interested in seeing how GM stock performs through the summer of 2020, especially during the COVID-19 crisis. The refresh of a bunch of 2021 models will be delayed, such as the Chevrolet Silverado 1500, GMC Sierra 1500, Cadillac XT4, Chevrolet Traverse, Chevrolet Equinox, GMC Terrain, Chevrolet Bolt EV and Chevrolet Camaro.

Meanwhile, the Detroit-based automaker is continuing the launch of its GEM-based vehicles for developing markets and begins to launch its all-new full-size SUVs and various new Cadillac models this year. In addition, the roll-out of its full-size pickup trucks is now complete, which means the company will benefit from an entire calendar year with a full lineup. All of these products are expected to contribute significantly to GM’s bottom line.