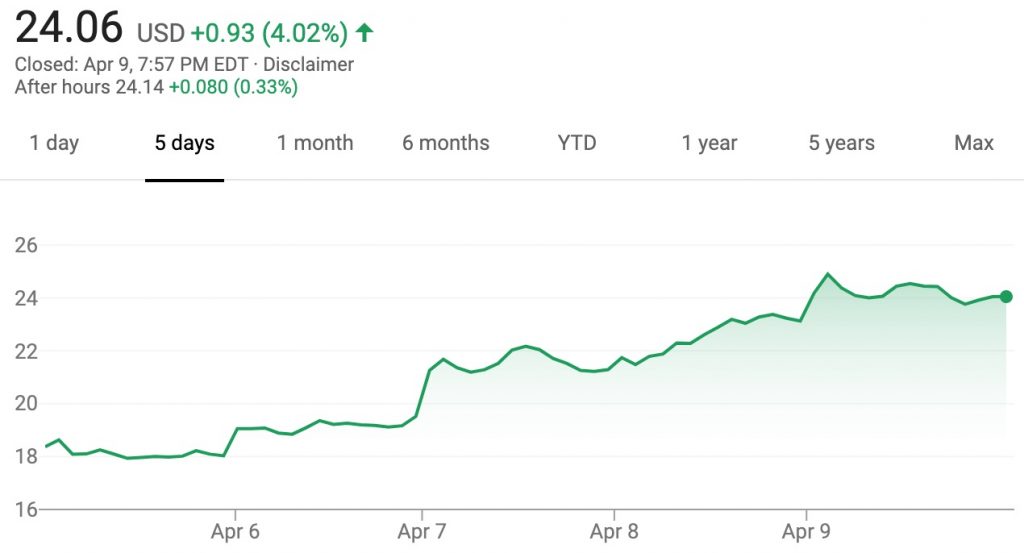 The rebound in GM stock value may be surprising to some, and not so surprising to others. Generally speaking, there are currently two camps of thought when it comes to investing in GM.

On the one hand, some still think that, due to the complications caused by the ongoing COVID-19 outbreak, things will get worse before they get better. In a recent report by Barron’s, Deutsche Bank Analyst Emmanuel Rosner said GM has about “15 [to] 17 weeks of liquidity under shutdown conditions before hitting its minimum cash levels.” As such, the analyst remains cautious despite rising share values.

On the other hand, reports also indicate that the overwhelming majority of analysts still rate GM stock as a “buy”, which is a good sign for prospective investors. Another good indicator is the fact that the possibility of a downgraded credit rating did not seem to have an adverse effect on share values, as GM stock rose following the news.

Interestingly, GM share values were experiencing this continued ebb and flow since mid-2018, long before Coronavirus complications, though shares have never dipped to the levels seen in March and April.

The impact of the COVID-19 pandemic is not to be understated, as the Big Three domestic auto manufacturers – Ford, FCA, and GM – have ceased production amid the outbreak. That said, there is a notable difference in other key decisions made by the companies. Case in point, Ford opted to borrow $15.4 billion from its existing credit lines and suspend its dividend, while GM drew down $16 billion, while keeping its divided.

There is some good news, though. A recent analysis shows that GM’s full-size SUVs outsold all rivals combined in 2019. Additionally, new products are on the horizon, including the recently-announced GMC Hummer EV pickup and SUV, GM’s advanced new proprietary Ultium batteries, which debuted at GM EV Day in early March, and a new modular BEV3 platform, which will underpin various upcoming electric models, such as the Cadillac Lyriq electric crossover, Cadillac Celestiq electric sedan, another Cadillac EV crossover and various EVs from the Buick and Chevrolet brands. However, the Coronavirus breakout has led to delays for most of these products.

By comparison, shares of GM’s cross-town rival, the Ford Motor Company, increased $1.13 per share, or 27 percent, this week.

For the most part, GM stock was in limbo throughout most of 2019, and has only faced more adversity in 2020. GM stock saw an initial jump in value as a result of overwhelmingly positive Q2 2019 earnings, wherein the automaker outperformed expectations. Prior to onslaught of the COVID-19 pandemic, several subsequent drops in value prior to the strike are believed to have been related to warning signs of an economic slowdown, along with various escalations with trade wars in China.

We remain interested in seeing how GM stock performs through the summer of 2020, especially during the COVID-19 crisis. The refresh of a bunch of 2021 models will be delayed, such as the Chevrolet Silverado 1500, GMC Sierra 1500, Cadillac XT4, Chevrolet Traverse, Chevrolet Equinox, GMC Terrain, Chevrolet Bolt EV and Chevrolet Camaro.

Meanwhile, the Detroit-based automaker is continuing the launch of its GEM-based vehicles for developing markets and begins to launch its all-new full-size SUVs and various new Cadillac models this year. In addition, the roll-out of its full-size pickup trucks is now complete, which means the company will benefit from an entire calendar year with a full lineup. All of these products are expected to contribute significantly to GM’s bottom line.