General Motors subsidiary Cruise Automation is now the first self driving car company to run its vehicles off 100% renewable energy, the company said in a Medium post published Wednesday.

“We’re proud to be the only self-driving company to operate an entire fleet of all-electric vehicles,” Cheung said. “Today, we’re excited to share that we’ve taken this commitment a step further by running our San Francisco fleet of autonomous vehicles (AVs) on 100% renewable energy.” 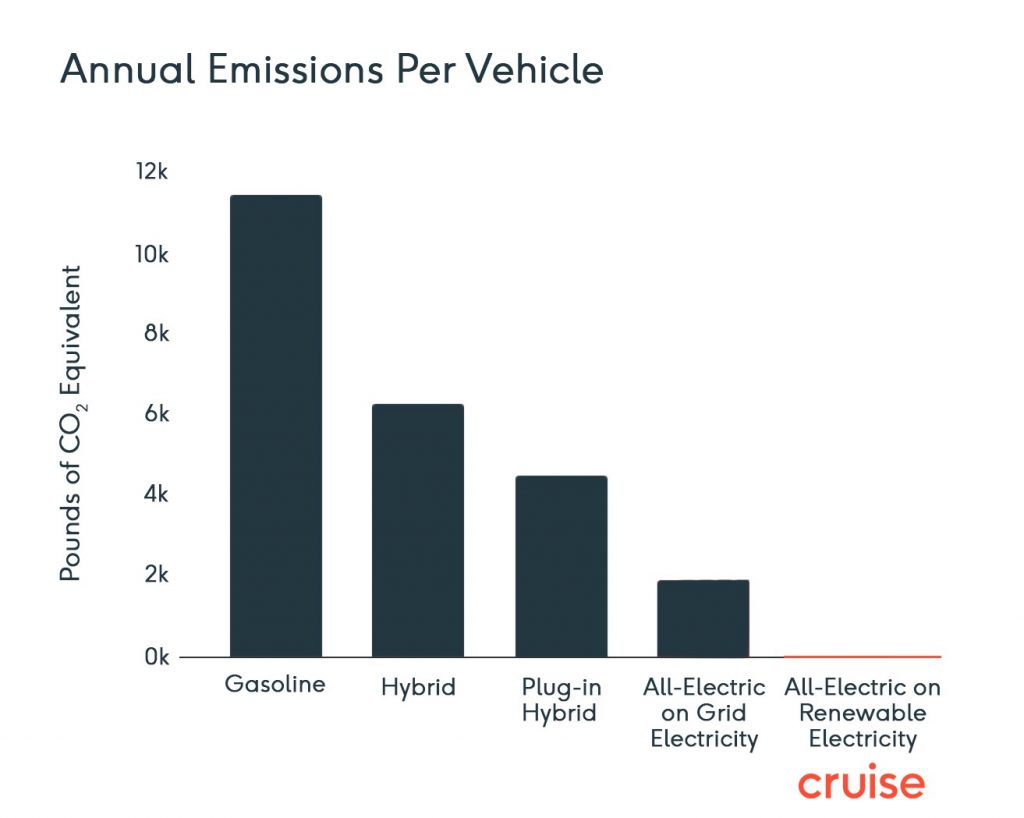 Cheung says the step to powering Cruise vehicles off 100% renewable energy “is important because transportation is the single largest GHG contributor in the United States.” She says that transportation accounts for more than 40% of California’s total emissions output, 70% of which come from light-duty passenger vehicles.

“Every gasoline-powered car emits more than three times its own weight of CO2 into the air each year and pollutes our air six times more than an all-electric vehicle,” the post also claims. “This means that electric vehicles can lower GHG emissions by 83% versus gas-powered cars and have zero tailpipe emissions.”

Cruise’s efforts to use renewable energy to power its development prototypes are part of a larger initiative that parent company GM has undertaken in recent years. In 2016, the automaker outlined a plan to power 100% of its global facilities with renewable energy by 2050. In January of this year, the automaker said it was on track to meet that goal in 2040, 10 years earlier than expected.

GM’s commitment to both renewables and the idea of self-driving cars is representative of its Vision Zero initiative, as well. Under Vision Zero, the automaker is hoping to usher in a world with zero traffic congestion, zero emissions and zero road accident deaths. It sees self-driving cars as critical to the Vision Zero goal, believing the technology can reduce traffic in city centers and help to reduce the number of people that are killed in car crashes.

The automaker announced earlier this year that its first production-ready self driving car, the Cruise Origin, will be built at its Detroit-Hamtramck Assembly plant in 2022. It hopes to one day use the Cruise Origin self driving car as the basis for a fully autonomous ride-share service similar to Uber or Lyft, though it’s not clear when this service may launch.