With the introduction of the mid-engine Corvette C8, Chevrolet’s iconic sports car has made a leap toward supercar territory.

Take Canadian YouTuber and Chevy sales consultant Morgan Crosbie for example. He recently took delivery of his Ceramic Matrix Gray Metallic 2020 Corvette and, despite the ground being covered in slush and snow, decided to go for a drive to give his viewers an idea of how it performs in colder climates.

Tires are of course the biggest contributing factor toward how a car handles in the snow and slush. Crosbie’s 2020 Corvette is still wearing the Michelin Pilot Sport 4S tires that come with Z51-equipped Vettes, but he mentions that to his knowledge, prototype models with Bridgestone Blizzak winter tires also performed well in testing. It’s worth noting the Pilot Sport 4S tires are not intended to be driven when it is very cold out, although they are seemingly not prone to cracking in colder temperatures like some other performance tires, as Chevy is still willing to ship the Corvette C8 in winter months. 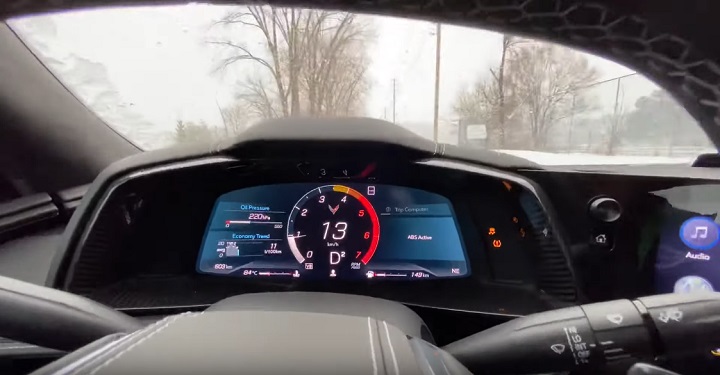 In addition to talking about the tire’s snow performance, Crosbie also does some acceleration and braking tests with the car in light snow. Check out the video embedded below to hear what Crosbie had to say about how his new sports car handles Canada’s rather harsh winter environment.