General Motors discontinued several of its passenger car models in recent years, including some nameplates that will be missed by some GM fans, such as the Chevrolet Impala. Not quite as many people were upset when GM announced the demise of the Buick LaCrosse, though – a rather forgettable full-size sedan that lasted just three-generations before being killed off in North America at the end of 2019.

The Buick LaCrosse is the kind of car you can find for $1,000 or so with relatively low miles at your local used car lot. It’s a rather expendable vehicle, then, so it’s safe to say we weren’t very surprised when we stumbled across a video of a YouTuber wrecking a perfectly good one.

In the video, which is embedded below, the YouTuber in question plants a piece of Styrofoam in between the front seat and the gas before starting the car. This sends it barreling toward a nearby dirt cliff before it drives off it and crashes to the ground below. Surprisingly, the Buick’s engine remains running, sending the vehicle driving toward a house before it crashes into a nearby a tree stump. 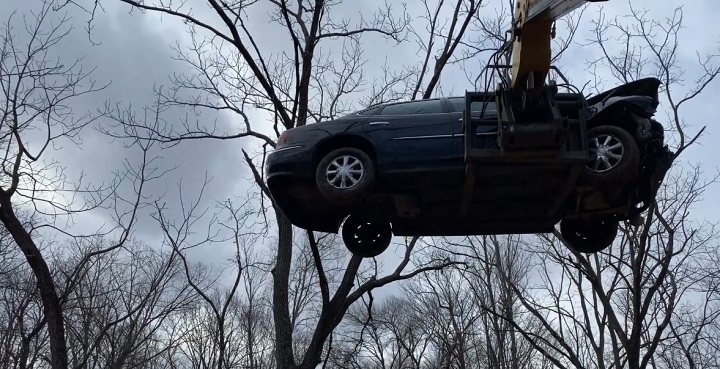 With the vehicle not sufficiently damaged (but also not able to drive under its own power) our friend loads the vehicle onto a CAT pallet fork loader and drops it from a rather considerable height right onto its roof. This destroys the car, safe to say, leaving the world with one less Buick LaCrosse. We’re sure no tears will be shed, but it’s kind of a shame, isn’t it?

If this sounds like your kind of viewing experience, check out the video below.

Be sure to subscribe to GM Authority as we bring you more Buick LaCrosse news, Buick news and more ongoing GM news coverage.