The coronavirus pandemic has forced the NASCAR Cup Series to go on hiatus for the foreseeable future, but race fans were still treated to some on-track action Sunday thanks to iRacing.

Some of NASCAR’s biggest names logged onto the racing simulator this Sunday for the first-ever eNASCAR iRacing Pro Invitational Series event, the Dixie Vodka 150 from Homestead-Miami. The online race served as an unofficial, non-points-paying replacement for the Dixie Vodka 400, which was set to be held at the Florida raceway on Sunday before the pandemic forced its cancellation. 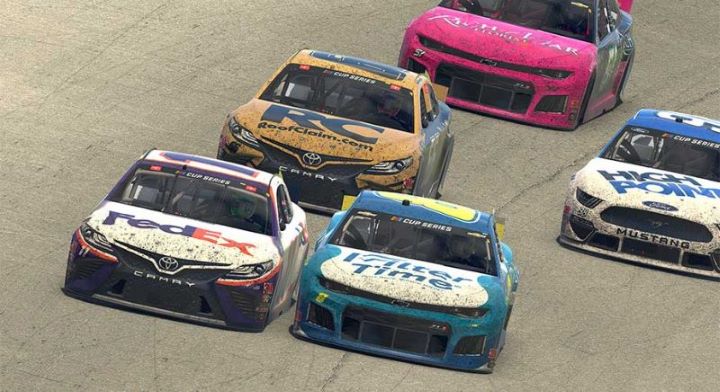 The virtual event was won by 2020 Daytona 500 champion Denny Hamlin, who prevailed over Dale Earnhardt Jr. in a hard-fought battle that played out over the final five laps. Hamlin, who had fresher tires than Earnhardt, was able to carry more speed on the outside as the pair raced through Turns 3 and 4 on the final lap. The two made contact as they exited Turn 4, causing Earnhardt to lose momentum as his No. 8 Chevrolet Camaro ZL1 was forced down onto the apron. Hamlin crossed the finish line ahead of Earnhardt, with Timmy Hill, Chase Briscoe and Garrett Smithley rounding out the top five.

“I just ran my line, he gave me the proper space and we were able to race to the line,’’ Hamlin told NASCAR.com after his big online win.

“I’ve raced him on here (iRacing) for two decades, I thought he’d be hard to beat,’’ added Earnhardt.

While the Dixie Vodka 150 was just for fun, the event attracted no shortage of racing talent. Jimmie Johnson, Brad Keselowski, Joey Logano, Bobby Labonte, Chase Elliott, Matt DiBenedetto and Kyle Busch were among the drivers that made up the star-studded grid. The commentary booth was also stacked with Fox Sports regulars Mike Joy, Jeff Gordon and Larry McReynolds.

NASCAR.com was happy with the event, saying the virtual race “provided all the exciting, lap-by-lap intrigue fans would have seen in a regular points race,” despite being run on iRacing. It also helped advance the fight against COVID-19, with Hamlin celebrating his victory by donating $5,000 to the NASCAR Foundation to assist Miami-area families affected by the virus. Hamlin also donated an additional $100 for every lap he led, bringing the total to $6,400.

It should be noted that iRacing is not a video game, such as NASCAR Heat, but a simulator that attempts to accurately mimic the behavior of a NASCAR Cup Series car. Developers also use LIDAR to laser scan tracks and model every bump or dip they may feature in real life.

“We know, this is not real racing,” Fox Sports’ announcer, Mike Joy, told the audience during the broadcast. “But it’s not a video game either — iRacing is a very sophisticated simulation that real race drivers as well as armchair racers use and compete against each other.”

Check out all the highlights from the eNASCAR Dixie Vodka 150 in the video embedded below.