A 27-year old Gardena, California woman was arrested on suspicion of drunk driving after she crashed through a boulevard at a high rate of speed, sending a boulder flying into a Chevrolet Camaro that was parked nearby.

Police were called to the area of 4th Street and Daisy Avenue in Long Beach last Thursday at around 2 a.m. after receiving reports of a single-vehicle crash. A surveillance video of the crash showed the vehicle, a blue BMW M4, traveling down a two-lane residential road at a high rate of speed before hitting the boulevard in the center of a traffic circle. The BMW then impacts a decorative rock that was sitting in the middle of the boulevard, sending it flying several meters before it strikes the back end of a Chevrolet Camaro. The force of the 300 lb rock was so strong that it moved the Camaro forward by a few feet, pushing it into the back of a Chevrolet Equinox that was parked in front of it. LA CBS affiliate CBS2 says the Equinox was then pushed into a third car, causing further damage. 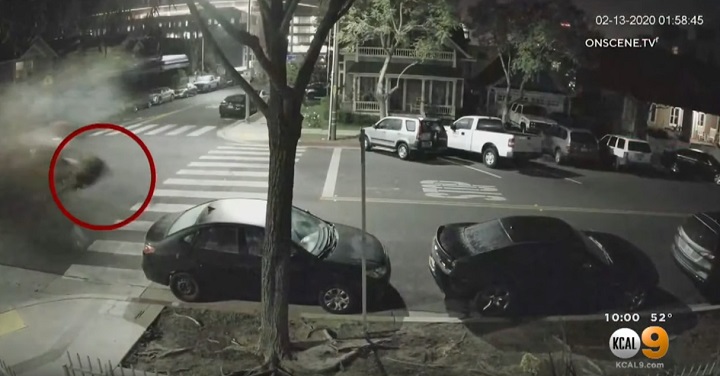 The significant impact of the crash also sent the BMW flying several feet into the air before it came to a rest further down the street. The driver of the German sports coupe, Marisela Ovalle, was not hurt in the accident. She was arrested on suspicion of driving under the influence and is being held on $30,000 bail. 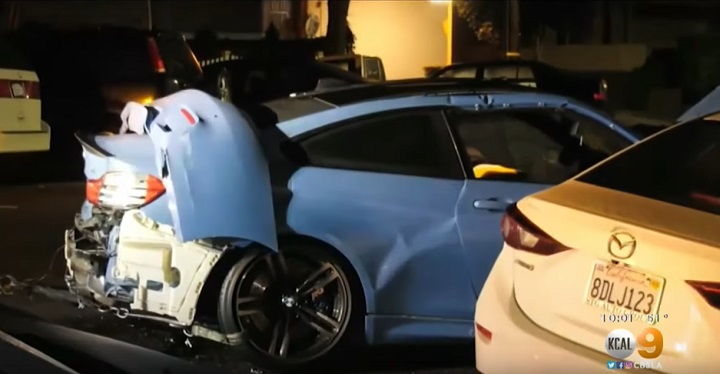 In addition to damaging three other vehicles that were parked nearby, the crash also sheared a water valve, which began leaking water and later had to be shut off by firefighters. Witnesses said they believed the car was traveling at a rate of at least 70 mph when the impact happened. The speed limit in most residential or business zones in California is 25 mph.

Check out the video of this dramatic crash embedded below.