If you have to rent multiple warehouses just to support your hobby, as many wealthy classic car enthusiasts have been known to do, you probably have some sort of problem. Regular people would probably seek out a therapist to address their hoarding problem if it required them to take such measures, but car enthusiasts aren’t regular people. Rather than encourage them to save their money and spend wisely, classic car fans seem more likely to push their friends to keep adding to their stockpile. 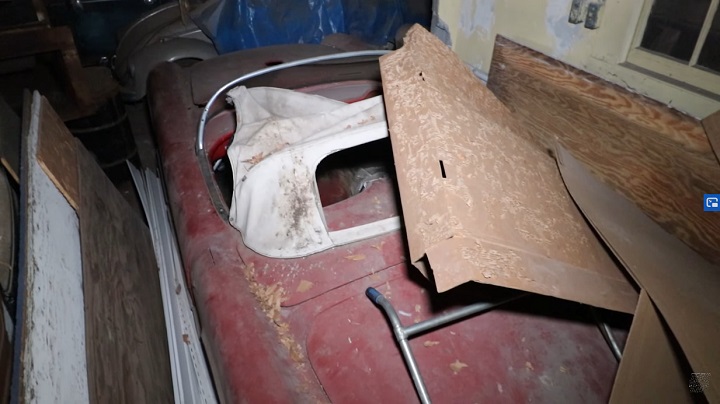 Larry Schroll is a car enthusiast with a bit of a hoarding problem, but no true car enthusiast would criticize Larry’s life decisions after laying eyes on his classic car collection. Schroll has dedicated much of his life to gathering cars and unlike many fans of Detroit iron, he isn’t beholden to one single brand. Schroll’s collection is full of both Ford and General Motors vehicles, including one very rare 1954 C1 Corvette.

Schroll’s C1 Corvette is painted in Sportsman Red and is reportedly one of just 100 Corvettes to leave the factory in the eye-popping exterior color in 1954. Schroll purchased the car in 1969 and drove it briefly, but it has spent the majority of its life collecting dust in one of Schroll’s garages.

The C1 isn’t the only Corvette being hidden away by Schroll in his collection. He also owns a clean C3 Corvette, along with a number of other notable Chevrolet vehicles, including a Corvair.

YouTube channel IronTrap Garage recently paid a visit to Schroll’s collection and documented the countless vehicles he has stored away. The vehicles will soon be sold via an estate auction, but you can get a great look at some of Schroll’s most notable vehicles in the video below. Be sure to check it out and let us know which of these rare classics is your favorite in the comments.