The 2021 Cadillac Escalade will make its official debut during a special event in Beverly Hills, California this evening.

We won’t have to wait much longer to get the full scoop on the 2021 Cadillac Escalade, but we still wanted to provide a quick run-down of what to expect from the next-generation luxury SUV.

Like the 2021 Chevrolet Tahoe/Suburban and 2021 GMC Yukon/Yukon XL, the new Cadillac Escalade will ride on General Motors‘ updated T1 platform and will feature fully independent rear suspension. The IRS system will ensure this new Escalade has a more refined ride than the outgoing solid rear axle model and will also give the SUV more spry handling characteristics. We expect to see GM’s next-generation Magnetic Ride Control system on the SUV, as well, in addition to an optional Air Ride Adaptive Suspension system.

GM’s naturally-aspirated 6.2L V8 L87 gasoline engine and 10-speed automatic transmission will serve as the base powertrain in the 2021 Cadillac Escalade. The SUV will also offer the 3.0L I-6 LM2 turbo-diesel Duramax engine, as we exclusively reported this week, which will make it the only vehicle in its class to offer a diesel powertrain.

A high-performance variant, likely called the Escalade V, will join the lineup at a later date and will feature a supercharged 6.2L V8 gasoline engine, similar to the LT4 V8 that powers cars like the Cadillac CTS-V, C7 Corvette Z06 and Camaro ZL1. A battery-electric variant with up to 400 miles of range will eventually be offered, as well.

Leaked images revealed the interior of 2021 Cadillac Escalade will take after the Cadillac Escala concept, featuring a 38-inch curved OLED display with twice the pixel density of 4K television. The dashboard and center console design, meanwhile, will be very similar to other new Cadillac crossovers, like the XT6 for example. Cadillac’s Electronic Precision Shift gear selector will also be present, with the Escalade set to get rid of the column shift system that is on the current model.

As for new technology, the SUV will feature the latest version of the Cadillac Super Cruise Level 2 semi-autonomous system, which can automatically switch lanes if the driver presses the turn signal while the system is engaged. 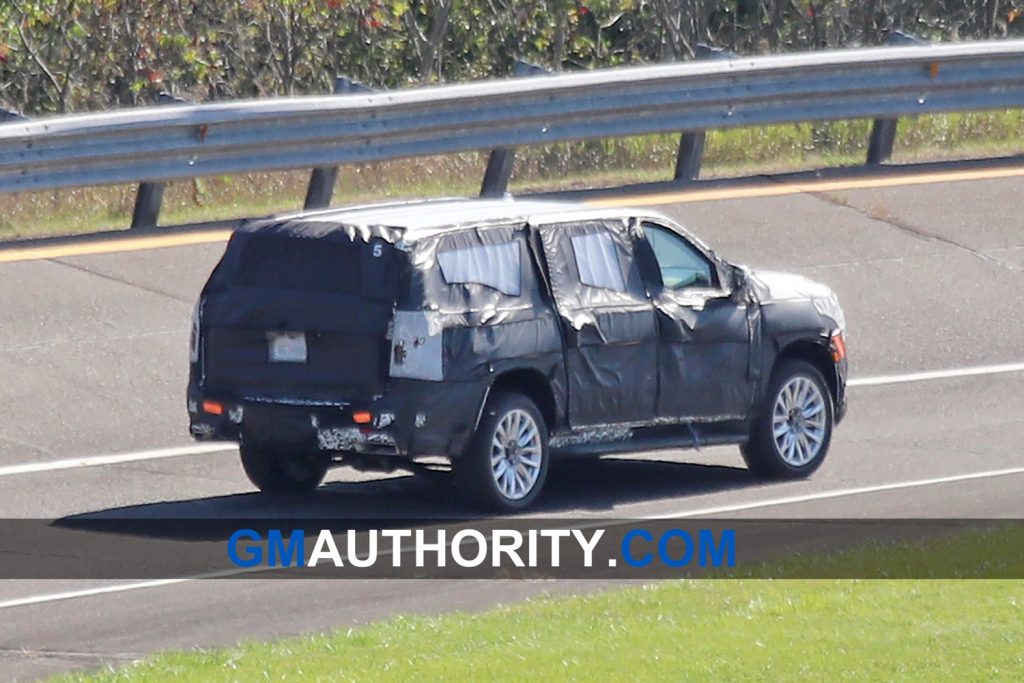 Previously leaked exterior images also give us an idea of what the 2021 Cadillac Escalade will look like from the outside. The SUV will have a silhouette similar to the 2021 GMC Yukon, but with some additional chrome trim. The front fascia features a large grille with vertical LED lighting elements, adhering to Cadillac’s corporate design language, while the rear looks similar to the current-generation Escalade with large, vertical LED taillamps positioned on either side of the rear liftgate.

The 2021 Cadillac Escalade will be assembled at GM’s Arlington plant in Texas, where it will be built alongside the new Tahoe, Suburban, Yukon and Yukon XL.

Stay tuned for complete details on the 2021 Cadillac Escalade following its Beverly Hills debut at 9 p.m. EST tonight. GM Authority will be in attendance at the event to bring you live coverage and exclusive details on the new SUV.