The 2021 Cadillac Escalade ESV has been shown in General Motors‘ online 3D visualizer for the new luxury SUV.

As we reported this week, the 2021 Cadillac Escalade ESV won’t make its official debut until the 2020 New York International Auto Show in April. GM made a minor mistake when launching the 3D visualizer/configurator for the standard 2021 Escalade, though, and forgot to exclude the larger ESV from the program – allowing us to see it well ahead of its planned debut.

Luckily for GM, this little leak isn’t very shocking or surprising, as it’s not hard to envision what the 2021 Cadillac Escalade ESV may look like after seeing the standard variant. The two will appear identical, although the ESV will be about a foot longer. We don’t know the exact dimensions yet, but the 2021 GMC Yukon XL, which shares its T1 platform with the new Escalade, has 13.2-inches on the standard GMC Yukon.

As for the visualizer itself, it uses the same software as the 3D visualizer tool that Chevrolet launched for the 2020 Corvette Stingray. The software allows potential customers to customize their own 2021 Cadillac Escalade online and see how the various exterior and interior color options and wheel options look on the vehicle ahead of its launch in the third quarter of this year.

“The visualizer allows customers to engage with the 2021 Escalade right from their phone or desktop, six months before the vehicle is available in showrooms,” said Cadillac Escalade marketing manager Robert Benbow. “And it will only get better over time.” 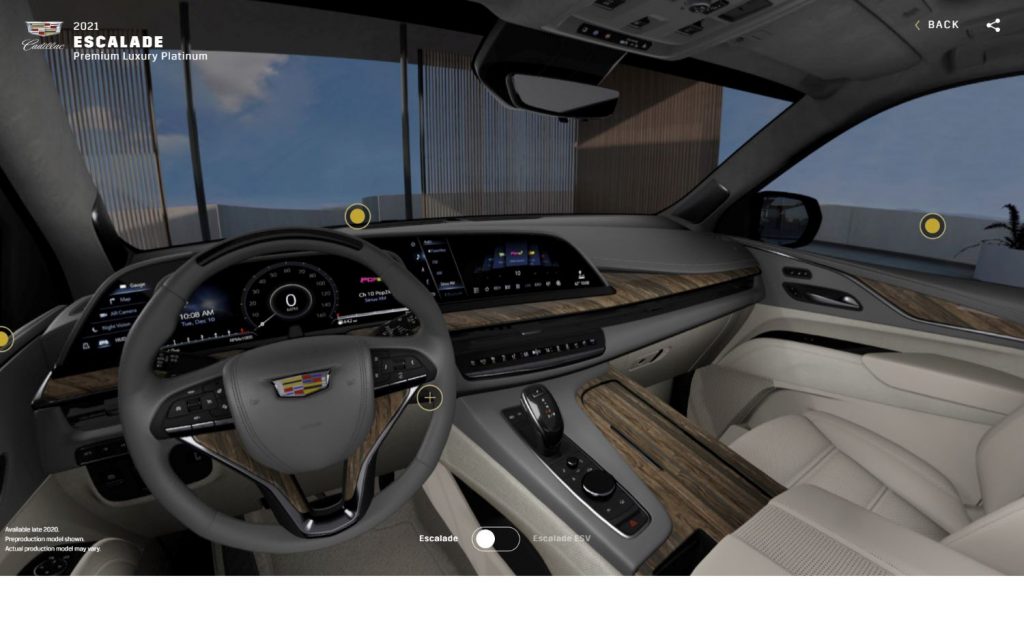 GM says that as it adds to the Cadillac Escalade and Escalade ESV options list, the visualizer will update to reflect the changes. That likely means that when GM launches the upcoming high-performance variant, which will likely be called the Escalade V, it will appear in the 3D visualizer. The same should be true for the forthcoming battery-electric version of the SUV, too.

Stay tuned for complete details on the 2021 Cadillac Escalade ESV following its debut in New York City this spring. Pricing for both SUVs will be announced closer to their arrival at Cadillac dealerships in the third-quarter of this year.