It’s not every day you see a used car ad that calls the vehicle a “little monster” that you will “undoubtedly roast the tires with,” but then again, it’s not every day that we see a V8-swapped Chevrolet Vega for sale.

That’s how Gateway Classic cars in Detroit describes this 1976 Chevrolet Vega, which is hiding a 350 cubic-inch V8 under its hood. The V8 replaces the vehicle’s stock four-cylinder engine and makes “about double the horsepower” of the original 2.3-liter motor, according to the dealership. That estimate seems a bit conservative, seeing as the Vega’s four-cylinder was only good for 90-110 horsepower, but it’s hard to say how powerful this particular 350 V8 is without knowing much about it. Regardless, the V8 helps make this little Chevy much quicker than before and, perhaps more importantly, gives it the type of noise you’d expect to hear from a 1970s American coupe. The engine is paired with a TH350 three-speed automatic transmission. 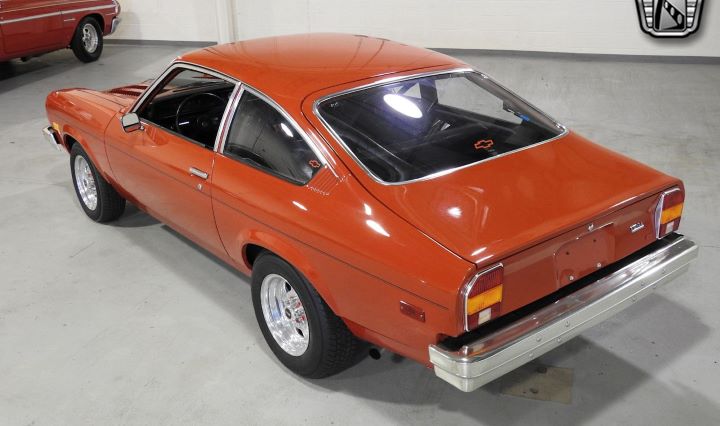 Other notable features of this car include chrome Weld aftermarket wheels, front disc brakes, aftermarket gauges and a stock AM/FM radio. It also has a “well maintained” cloth-vinyl combination interior. The car has just over 30,000 miles on the odometer, according to the listing, which we imagine is the amount of mileage the car has accumulated since the V8 swap was performed. The dealer is asking $21,500, which seems high for a Vega, though we suppose the V8 swap is driving the price up here.

The Chevrolet Vega is a frequently modified vehicle due to the car’s relatively low price when new and its small, lightweight stature, with V8 swaps being particularly common. Chevrolet itself even built a V8 Vega prototype in 1972, which featured an all-aluminum 286 cubic-inch V8, though it never entered production.

Check out the listing for this car at this link for some additional information and photos and feel free to let us know what you think of this build in the comments down below.