A Chicago man caught the internet’s attention after he drove more than 400 miles with a snowmobile hastily strapped to the roof of his 2005 Chevrolet Malibu.

According to Chicago news outlet WGN9, 22-year old Thomas Mecher didn’t want to rent a truck or trailer to haul his recently purchased snowmobile up to Bessemer, Michigan for a snowmobiling trip, so he simply strapped it to the roof of his Chevrolet Malibu using a couple of pieces pf plywood and some tie-down straps. The 1990 Polaris snowmobile is Mecher’s first, though he has been snowmobiling for around six years, having previously ridden his family’s snowmobiles.

Mecher figured he’d end up online after he spotted people trying to take pictures of the setup as he drove home. When he arrived back in Chicago, he saw a video of his car driving down the highway on the “Official Wisconsin Snowmobile Enthusiast Club” Facebook page.

“I thought something was going to happen because there were people speeding down the highway trying to take pictures,” he told WGN9. 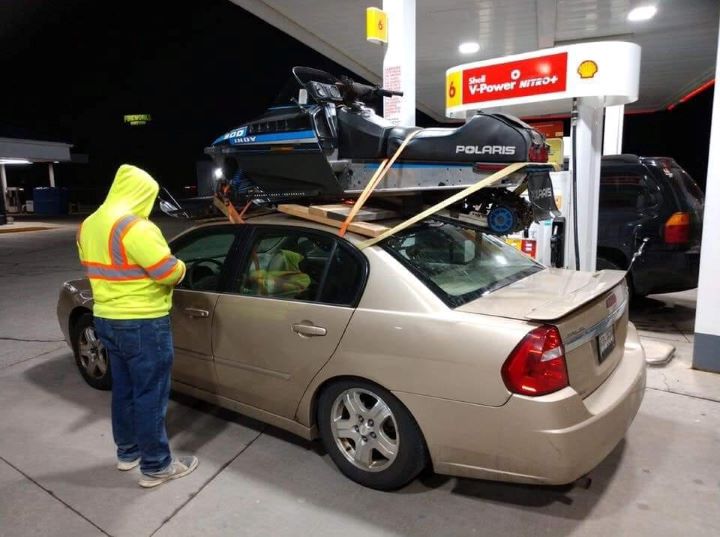 Mecher said he felt as though the snowmobile was sufficiently secured to the roof of his vehicle and that the only dangerous part of his journey was the people trying to take photos of him while he drove.

“That was the only thing that was dangerous,” Mecher said. “People trying to take pictures of me on the highway.”

Surprisingly, police never stopped Mecher to inspect his home-brew haulage solution, but he told WGN9 that he got a “comedic double take” from one officer in his Highland Park neighbourhood in Chicago. 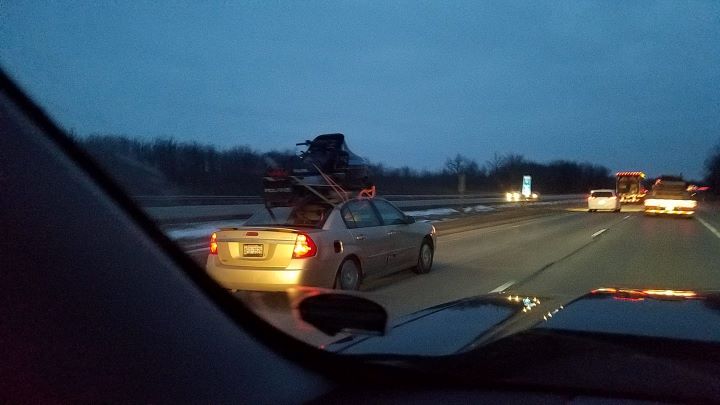 With dreams of one day taking his snowmobile to the Rockies, don’t be surprised if you see a gold 2005 Chevrolet Malibu with a snowmobile on its roof making its way west from Illinois sometime in the not-too-distant future.