With General Motors, Ford and Tesla all working on battery electric pickup trucks and newcomers like Rivian and Lordstown Motor Company also planning their own promising entries in the segment, the space is beginning to look a little crowded. While there’s no denying demand for an electric pickup exists, only time will tell if there’s enough demand to sustain the five-plus electric trucks that are on the way.

Now Karma Automotive, the company that was born from Fisker Automotive after it was purchased by China’s Wanxiang Group in 2014, is also planning its own battery-electric pickup truck. The company released a teaser image of the truck this week, showing a futuristic design with an illuminated Karma badge, narrow LED headlights, a large moonroof and a short-looking bed.

Karma Automotive didn’t say what price range it’s targeting for its electric pickup, only claiming that it will undercut its $135,000 Revero plug-in hybrid sedan. It seems the company is targeting the high end of the truck price range, then, instead of companies like Tesla and Rivian, which hope to offer well equipped electric trucks in the $50,000-$60,000 range. GM’s truck is also rumored to be priced on the high end of the spectrum and will allegedly be positioned as a premium off-roader. 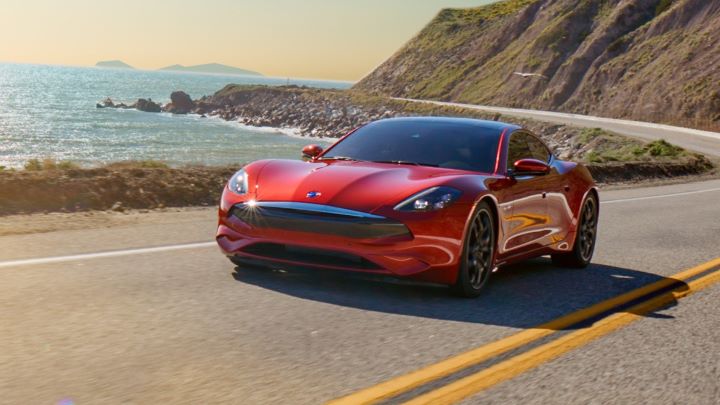 Karma plans to build its electric pickup on a new flexible platform that will also underpin a new luxury SUV. The vehicles will be built at the company’s plant in Moreno Valley, California, where the Revero is currently being built. It says the truck will debut before the end of the year, though it’s not clear when it plans to put it into production. It’s not clear when we can expect to see the SUV, either.

Karma is not to be confused with Fisker Inc. – the new company being helmed by vehicle designer and former Karma Automotive boss Henrik Fisker. Fisker’s new company recently showed off an electric crossover called the Ocean, which he says will go into production by 2022. The ocean will be offered in both single and dual motor variants and will have a range of 250-300 miles.