Charlie Kimball will contest the entire 2020 NTT Data IndyCar Series schedule in AJ Foyt’s No. 4 Chevrolet, with the full-time campaign set to be partially funded by the 34-year old’s long-time sponsor, Novo Nordisk. 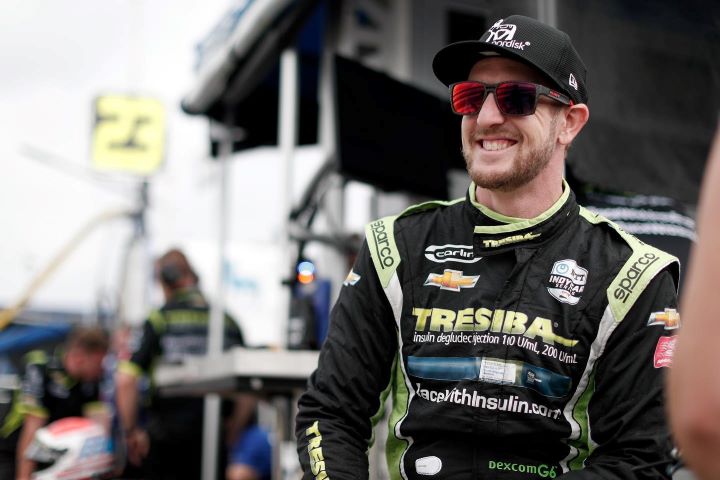 This will be Kimball’s 10th consecutive season in IndyCar, with the American having spent seven seasons with Chip Ganassi Racing from 2011 to 2017 before moving to Carlin for 2018 and part of 2019. His No. 4 car will carry a Novo Nordisk livery in six of this season’s 17 races (St. Petersburg, Long Beach, Indianapolis GP, Texas, Gateway and Monterey) and the healthcare company will have a smaller associate marketing role in the remaining 11 races, as well. That means the No. 4 will likely have a different main sponsor for the other 11 races, but the team may still be seeking partners, saying in a statement that it “expects to make further announcements regarding new primary sponsors for the team in the near future.”

“I’m excited and honored to join AJ Foyt Racing and be a part of a team that has such deep roots in history at the Indianapolis Motor Speedway and IndyCar,” Kimball said of the deal. “Continuing the partnership with Novo Nordisk is also special since they have been an integral part of my career since I was diagnosed with Type 1 diabetes. I’m more motivated than ever to work with the team to succeed at every IndyCar race in 2020. Thank you to AJ Foyt Racing, Novo Nordisk and our other partners for this opportunity.”

Team owner A.J. Foyt said Kimball “brings a great deal of experience and skill to the team,” and added that his “recent experience of helping develop cars will be beneficial as we work to get the 4 car moving up the grid.” Kimball, who has described himself as a technically-minded driver, helped Carlin get up to speed when it first entered IndyCar in 2018, bringing experience from his lengthy stint with series frontrunners Chip Ganassi.

The driver of the No. 14 Foyt Chevrolet has not yet been confirmed, but the car is rumored to be driven by a rotating cast of drivers that may include Sebastien Bourdais, Tony Kanaan and IndyLights driver Dalton Kellett.