Ownership of the first-ever production C8 Corvette Stingray was recently on the block at the Barrett-Jackscon Scottsdale auction, selling for an impressive $3 million. Proud new owner Rick Hendrick says he doesn’t plan on actually driving his new ride.

For those that don’t know, Hendrick is the current owner of the Hendrick Motorsports NASCAR team, as well as nearly 100 car dealerships.

Unsurprisingly, Hendrick is also a prolific car collector. In fact, the 70-year-old North Carolina native has a massive 58,000 square-foot museum called the Heritage Center that’s dedicated to his love of the automobile. Inside, the museum houses hundreds of rare vehicles, including some 120 Chevrolet Corvettes. Now, the Heritage Center is about to get one more – the C8 Corvette 0001.

“I’ll go to the plant and watch it come off the line,” Hendrick said at the recent Barrett-Jackson auction, referencing the GM Bowling Green Assembly Plant in Kentucky. “They have have an unbelievable Corvette museum there in Bowling Green and I’ll put it in there for a few days and then bring it home.”

As a former racing driver, there’s no doubt Hendrick loves driving fast cars. However, he won’t be testing the performance limits of his new C8 Corvette any time soon.

Frankly, it makes perfect sense, given the car’s prominence – not to mention the price tag. When it comes to collectible automobiles, having the first one is definitely a major factor with regard to longterm investment.

When it arrives in North Carolina, the new C8 Corvette will feel right at home alongside Hendrick’s many other first-built Vettes, including the 1955, 1956, and 1957 models, as well as the first-ever 1989 Corvette ZR1. 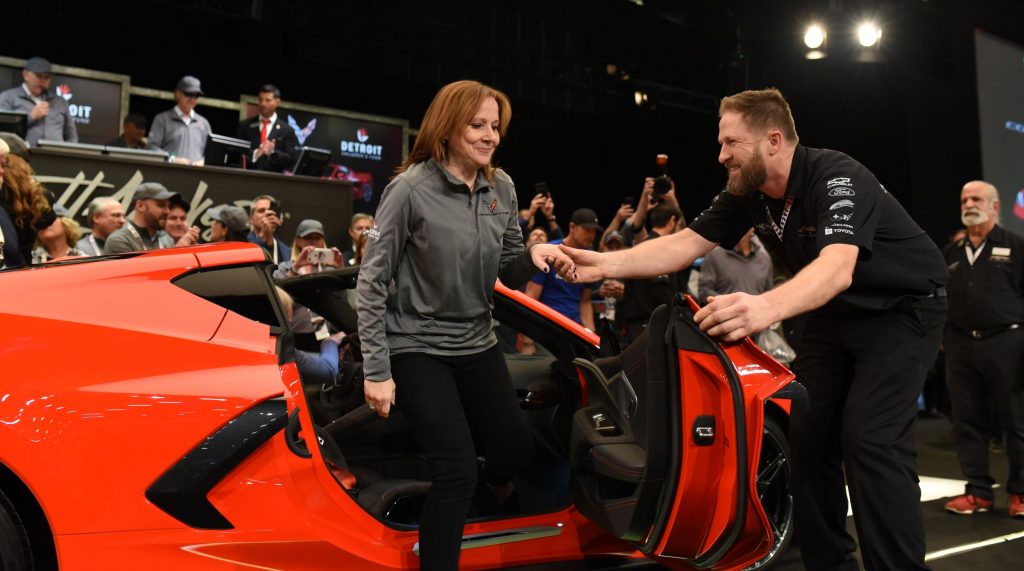 Still, the C8 Corvette 0001 will remain special for Hendrick.

“I’ve been going to these auctions for 25 to 30 years and I’ve bought a lot of number ones at auction for charity,” Hendrick said. “But nothing like this car. This had bidders from all over the world. It was so much drama. When you have the CEO of General Motors on the stage, that’s a big deal.”