The General Motors EV1 was rather well-loved by the customers that drove them in the late 1990s, but it’s clear that this red EV1, which was recently spotted by a Twitter user rotting in a parking garage in Atlanta, isn’t very beloved by its owner.

When the GM EV1 program came to an end in 2002, the automaker had most of the battery-electric two-doors repossessed and crushed. A small number were donated to educational institutions and museums, though these cars were deactivated, with GM pulling out the batteries and powertrain before handing them over. With these parts gone, the cars would not be driven and could not be returned to working order.

It is believed that this rotting red GM EV1 may have been one of the cars donated to an educational institution, and it’s simply being stored in a rather inconsiderate fashion. The front suspension ride height appears to suggest the rather heavy front-mounted electric motor has been removed, causing it to squat in the rear. However, it’s otherwise in decent shape, and the interior is also intact. That said, this EV1 isn’t good for much anymore – aside from being a display piece in a museum if it could be properly fixed up.

There are a few examples of the GM EV1 left in working order, though. One is owned by director Francis Ford Coppola, who says he stashed the car away when he learned that GM planned to repossess them. The Smithsonian Museum also took delivery of a fully intact GM EV1 shortly after the vehicle’s discontinuation and a handful of others are alleged to have traded hands anonymously. 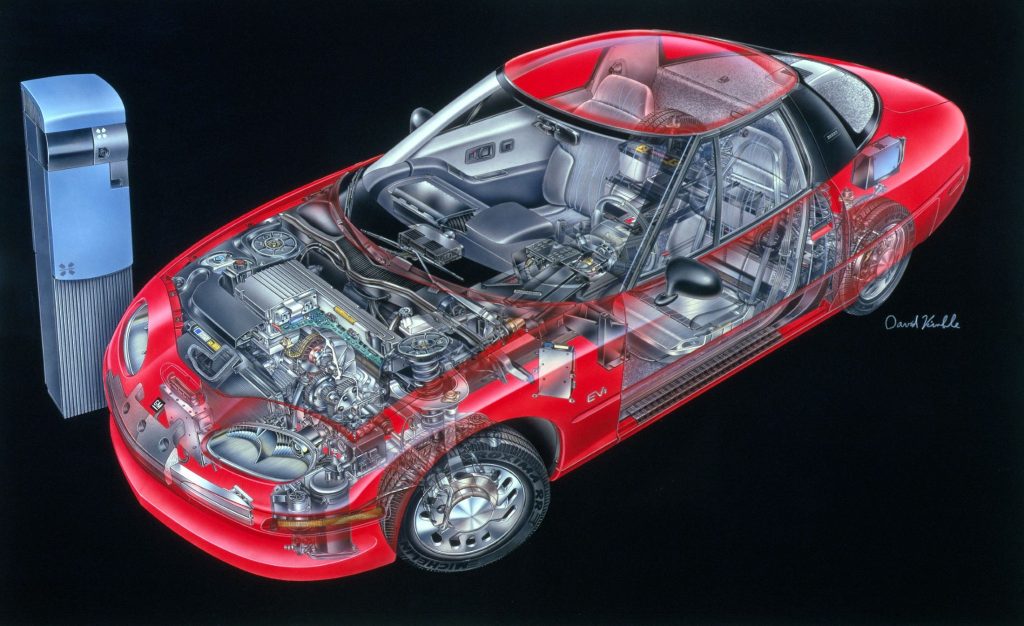 While customers were sad to let go of their EV1s, GM was eager to get rid of the car after CARB scrapped its zero-emissions vehicle requirement for manufacturers. Bob Lutz later said the cars cost GM about $250,000 each when factoring in the design, engineering and manufacturing processes, but they were being leased for just $300 per month. GM is believed to have spent about $1 billion on the project in total.