Corvette Racing driver Oliver Gavin has been nominated for the FIA’s Action of the Year award for his daring pass on the No. 82 BMW M8 GTE during the 2019 24 Hours of Le Mans.

Gavin pulled the impressive manoeuvre while fighting for position with the No. 82 BMW as well as the No. 68 Ford GT. The trio got bunched together on the entrance into the second chicane on the Mulsanne straight, with the BMW attempting to block Gavin’s No. 64 Corvette on the exit of the corner. Not wanting to give up the spot, Gavin gave the BMW slight nudge as he held his line and ended up in a three-way drag race with the No. 82 and the No. 68 heading down the straight into Mulsanne corner. With Gavin on the outside as they headed into the corner and the BMW and Ford hugging the inside line, it looked as though Gavin was going to lose out to both cars. He then outbraked the Ford and dove down the inside of the BMW, passing both to lead the way as they approached Arnage. 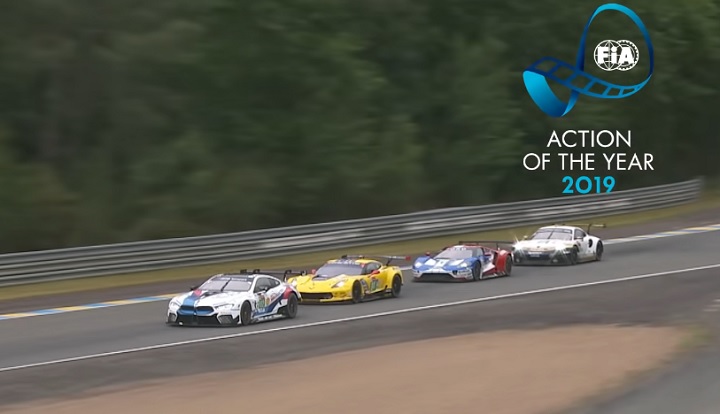 This move was not only impressive due to Gavin’s move under the brakes, but because he had to remain patient as the three raced in a tight pack. With the No. 91 Porsche 911 and No. 51 Ferrari 488 also following the trio close behind, any mistake would have proven quite costly for the Corvette Racing driver as well.

Unfortunately, the No. 64 Corvette didn’t finish at Le Mans after Gavin’s teammate Marcel Fassler suffered a heavy crash at fast Porsche Curves section of the track near the six-hour mark. Fassler was hit in the rear by a slower GTE Am-class Porsche as he attempted to pass it on the outside, sending him nose-first into the barrier. Fassler escaped the crash unharmed.

Check out the video of Gavin’s pass embedded below, via the FIA’s YouTube page.