Dwayne ‘The Rock’ Johnson’s most successful box office role to date is Luke Hobbes, whom he plays in the wildly popular Fast and Furious franchise. Just like Hobbes, The Rock is a genuine car enthusiast, with the actor and former WWE wrestler keeping a number of fancy rides including a Pagani Huayra and a Rolls-Royce Wraith. 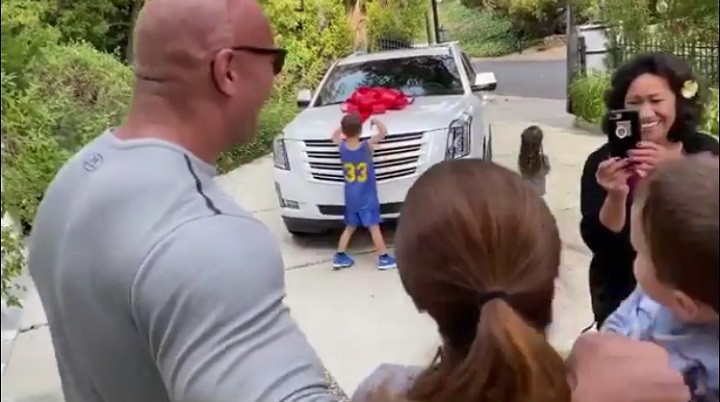 Considering his love for vehicles of all types, it’s no surprise that when The Rock wanted to get his sister-in-law a special gift for Christmas this year, he went to the car dealership. In an Instagram video posted this week, The Rock is seen gifting his sister-in-law with a new Cadillac Escalade. In the description for the post, The Rock said it felt good to give her such a big gift at Christmas, as she is “the most loving, supportive and coolest human we could ever ask for.”

“Enjoy your new ride with good mana and love,” the post also said. “Merry Christmas!  We’re grateful and we love you sis.”

This Christmas surprise felt good ? ?❤️ Merry Christmas to my sister in law, @aja_elan for simply being the most loving, supportive and coolest human we could ever ask for. From day 1. Enjoy your new ride with good mana and love. Merry Christmas! We’re grateful and we love you sis, Dwanta??, @laurenhashianofficial and your Johnson ohana ♥️?

The Rock married his longtime girlfriend Lauren Hashian in Hawaii back in August. The two had dated for over 10 years before tying the knot, first getting together in 2006. They had also lived together for nearly 10 years before getting married.

While The Rock has enjoyed significant success thanks to The Fast and Furious franchise, he won’t be reprising his role as Luke Hobbes for the upcoming Fast and Furious 9 film. Several other big names from previous films will return for the future franchise instalment, though, including Vin Diesel, Tyrese Gibson, Michelle Rodriguez and Ludacris.

The Rock also starred alongside Jason Statham in the Fast and Furious spinoff film Hobbs & Shaw, which was released back in July of this year. It was the ninth-highest grossing film of 2019, so a Cadillac is hardly a big purchase for the 47-year old actor.