We’ve covered the Genovation GXE quite extensively already. We got a full run-down of the car at the 2018 Los Angeles Auto Show, when the company had it on display in the show’s lobby, and last month we watched as the car hit a staggering 210 mph on an airplane runway.

Genovation is currently trying to push its battery electric Corvette, which is based on the C7 Corvette Grand Sport, to 220 mph. It recently made some progress in the hunt for 220, hitting 211.8 mph on the same airport runway as before and adding nearly 2 mph to the vehicle’s tested top speed.

The GXE is powered by two electric motors, which are good for a combined output of 800 horsepower and 700 pound-feet of torque. Power is routed to the rear wheels through the C7 Corvette Grand Sport’s GM eight-speed automatic transmission, though Genovation will also build customers a GXE with a seven-speed manual transmission – making it the only manual electric vehicle for currently for sale.

As for the battery pack, the GXE has a relatively small 60 kWh lithium ion battery that provides an estimated range of around 175 miles, though we imagine the range is heavily impact by driving behaviour. Turn in a couple of 211.8 mph runs and we imagine the predicted range will be quite a bit less than before. The car’s 10 kWh onboard charger can refill the battery from flat to full in about 7 hours. 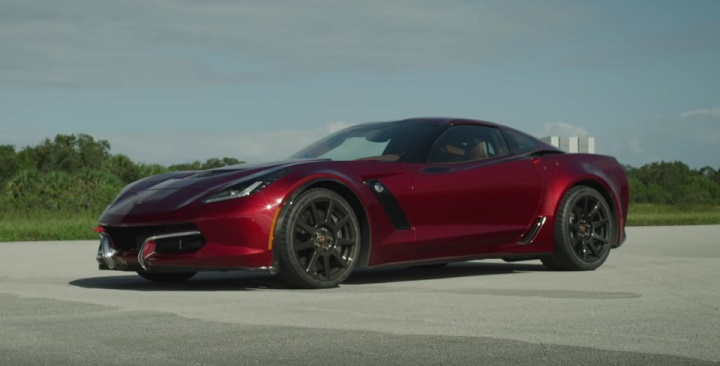 Genovation also says its electric Corvette can withstand about 20 minutes of hard driving on the track before the heat starts to impact the dual electric motor’s performance. Heat has proven to be a difficult obstacle for even major manufacturers to overcome with regard to performance EVs – let alone a small company like Genovation.

Watch this mad electric Corvette hit nearly 212 mph in the video embedded below. We’ll be sure to provide an update if Genovation ever hits its 220 mph goal, as well.