As General Motors has ramped up production of its Chevrolet Silverado 1500 and GMC Sierra 1500 light-duty pickups, is currently ramping up production of the Silverado HD and Sierra HD variants, and is investing in the GM Wentzville assembly plant to prepare the plant for the next-generation of the midsize Chevrolet Colorado and GMC Canyon, GM truck fans have plenty of models and configurations to choose from. However, there’s something still missing at The General: a pickup truck that’s over the top and unapologetic about anything and everything. So we rendered that very thing in this modified Chevrolet Silverado Medium Duty. 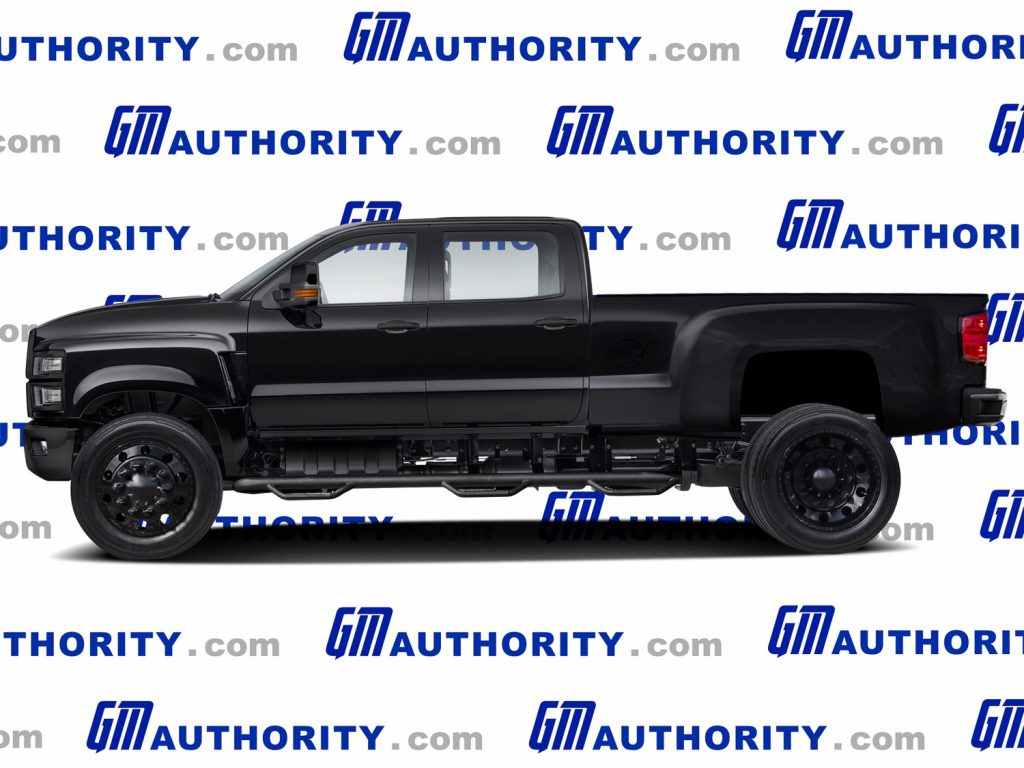 Simply put, GM currently does not offer the Silverado Medium Duty pickup truck for regular people to buy at retail. Instead, the Silverado 4500HD, 5500HD and 6500HD medium-duty trucks are reserved for fleet and commercial customers who need this type of truck for (real) work purposes. For that reason, the Silverado MDs are currently not offered with a pickup truck bed from the factory. Instead, they are shipped in the chassis cab configuration ready for upfitting with anything after the cabin – a cargo box, bed, or platform needed to get the job done. Not offering the Medium Duty Silverado to the public makes sense, as there is little real-world retail demand for such a vehicle. Luckily, we can dream with our renderings.

Our Silverado MD creation aims to show what the Silverado MD would look like if it were available to the public. We were inspired by the 2007 GMC TopKick from the Transformers movie series, also known as Ironhide. Using a Silverado MD as a base, the first thing we did was add a widebody bed to cover the truck’s dual rear wheels. The cab is pretty jacked up, so we also installed some tubular running boards with steps to allow passengers to gracefully enter and exit the vehicle. We also gave it a third step for easier side access to the bed, much like the BedStep feature of the new GM HD trucks. 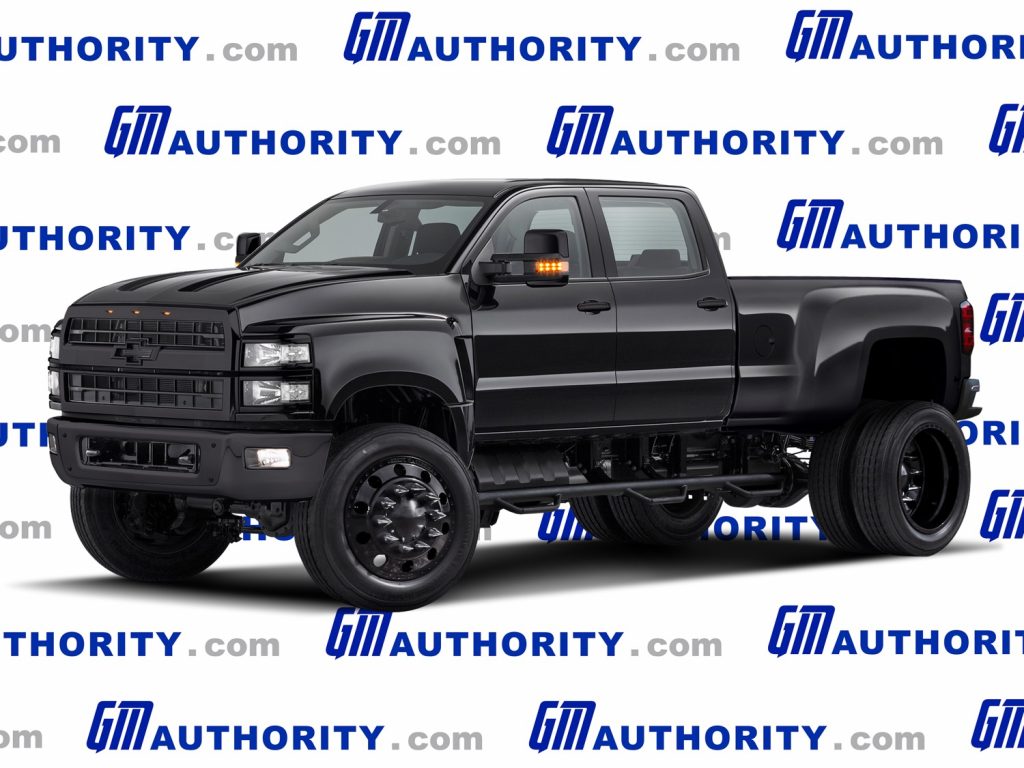 Next, we thought the Chevy Silverado MD pickup could use a more sinister look, so in addition to a black paint job, we added the Chevrolet Midnight Edition package, which rounds up black body elements, including body-color bumpers and door handles, a black grille and headlight surrounds, and black wheels. The Silverado MD gets the FlowTie Chevy bow tie badges straight from the factory, so that was left untouched. However, we did give them a black surround, replacing the chrome trim of the current models.

And though the Ironhide GMC Topkick sported bed-mounted exhaust stacks, we decided that our Silverado MD could do without them, and that semi-truck look isn’t something we were going after, either. However, we do prefer the dually setup for additional visual flair and capability, so we left that as is, too. 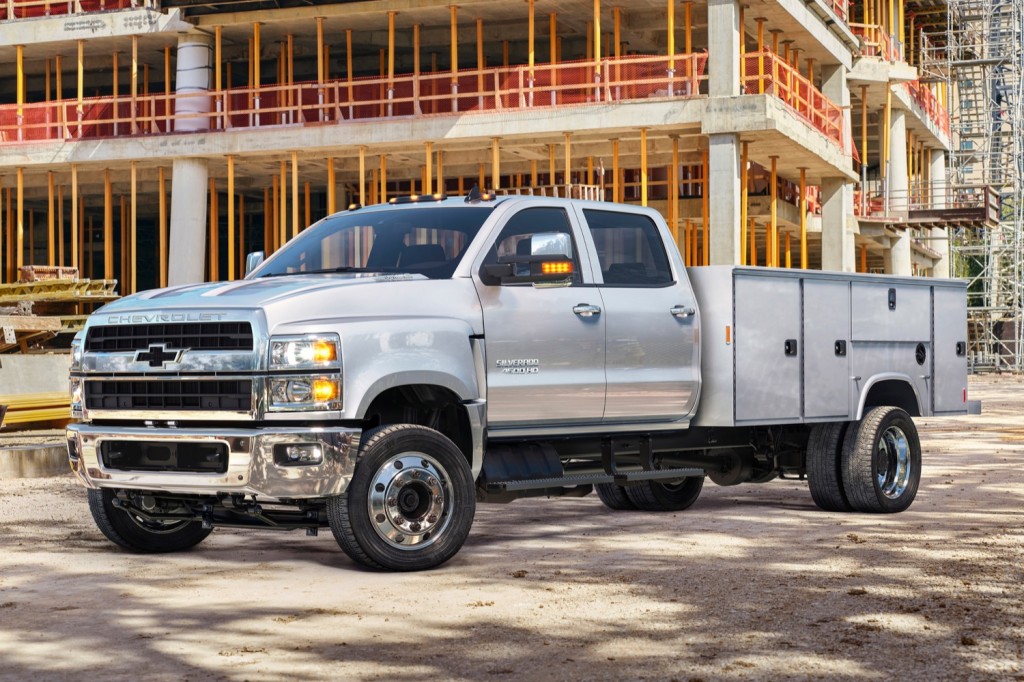 The Chevrolet Silverado 4500HD, 5500HD and 6500HD Medium Duty trucks are the result of a collaboration between GM and Navistar, with Navistar building the trucks in its Springfield, Ohio assembly plant. The trucks are equipped with a 6.6L L5D V8 turbo-diesel Duramax engine matched to a six-speed Allison automatic transmission. Output is rated at 350 horsepower and 700 pound-feet of torque. A gasoline engine has been rumored to join the lineup in the near future.

So, what do you think, beloved readers? Does our rendering of a consumer-oriented Chevy Silverado MD tickle your fancy? Is it just as mean-looking as the Transformers Ironhide GMC Topkick or a consumer-level Chevrolet Kodiak? Let us know in the comments section, and be sure to subscribe to GM Authority for more Chevrolet Silverado news, Chevrolet news, and around-the-clock GM news coverage.