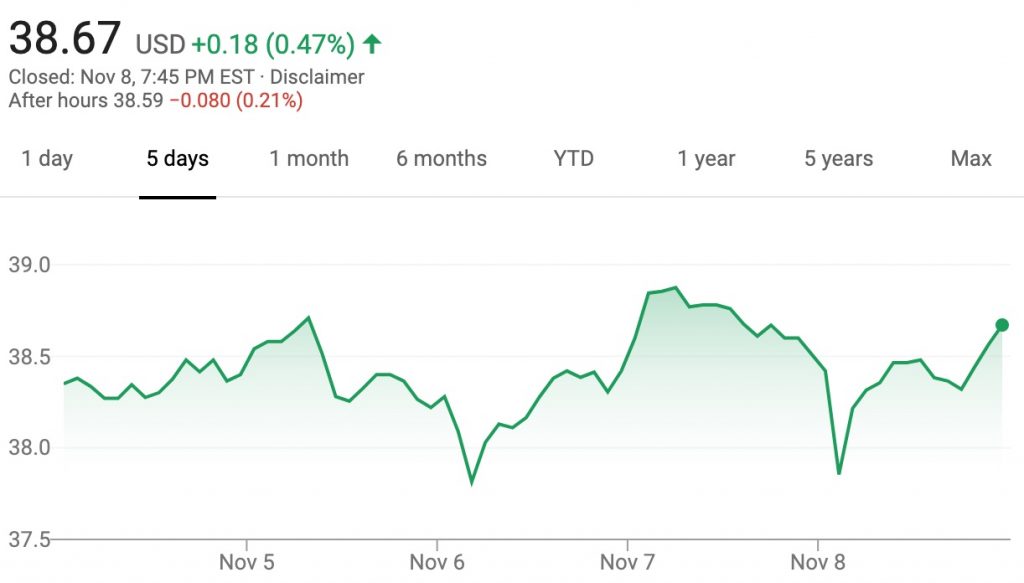 These results represent the fifth consecutive week in GM stock value growth. Last week, the Detroit-based automaker’s stock experienced a five-percent jump in value after the release of its Q3 earnings report on October 29th. Prior to that jump, GM share values took a hit as a result of the UAW strike. Luckily, the walkout has officially ended due to progress made in contract negotiations between The General and the UAW, wherein the UAW has voted to ratify the automaker’s proposed contract. Prior to the UAW-related turbulence, GM share values saw a three-week-long growth streak.

Earlier in the year, GM stock saw a jump in value as a result of overwhelmingly positive Q2 2019 earnings, wherein the automaker outperformed expectations. Some subsequent drops in value prior to the strike are believed to have been related to warning signs of an economic slowdown, along with various escalating matters in the ongoing trade war with China.

By comparison, shares of GM’s cross-town rival, the Ford Motor Company, increased $0.15 per share, or 2 percent, this week.

Over the last few years, GM has taken many steps to increase the value of its stock, including exiting markets where it can’t find ways to turn a profit (such as Europe, South Africa, and India), closing plants in various parts of the world, divesting loss-making divisions (such as Opel-Vauxhall), making adjustments to its business model in order to prioritize profitability over chasing market-share goals, focusing on its Cadillac luxury brand to increase its share of high-profit automobiles, investing heavily into new-age mobility ventures such as electric vehicles and autonomous driving tech, while discontinuing some sedans (Cruze, Impala, LaCrosse, XTS) and closing various plants to focus on more profitable crossovers, SUVs and pickup trucks.

We remain interested in seeing how GM stock performs during the final quarter of 2019, especially as the Detroit-based automaker launches its GEM-based vehicles for developing markets, completes the roll-out of its full-size pickup trucks and begins to launch its all-new full-size SUVs and various new Cadillac models. All of these products are expected to contribute significantly to GM’s bottom line.