While most buyers know all about keyless entry, the GM Keyless Entry Keypad is a relatively unknown alternative, mounting a numbered interface on the outside of the vehicle that allows owners access to the cabin without pulling out their keys. Now, GM is offering a new version of this feature for select 2020 model-year vehicles.

We covered the previous GM Keyless Entry Keypad just last week. Now, this new version of the feature has been completely redesigned, and comes with a fresh vertical layout, a new interface and a futuristic look to boot.

Compared to the previous GM Keyless Entry Keypad, this new version has a touch surface, rather than individual buttons. The new keypad’s buttons are also finished in a cool blue aesthetic. 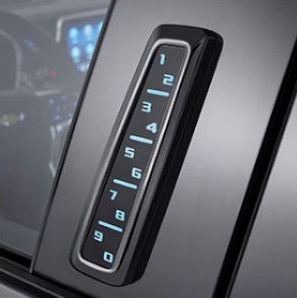 The new GM Keyless Entry Keypad mounts to the vehicle’s B-pillar and comes with a five-digit code to gain entry to the cabin space. As before, this feature basically makes keys and key fobs unnecessary for locking and unlocking the door, providing enhanced convenience for those buyers that don’t want to dig through their pockets or purses. 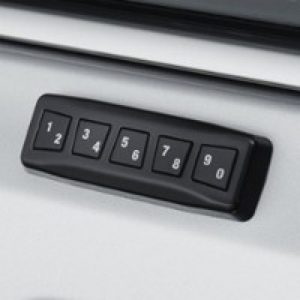 While one might consider this to be a more old-school approach to locking and unlocking a vehicle, it should provide a nice alternative for those owners that prefer to use an externally mounted keypad. We’re also liking the look of the new GM Keyless Entry Keypad. The vertical design integrates nicely with the B-pillar, with interesting angles and curves compared to the rectangular interface used previously.

The new GM Keyless Entry Keypad is tagged with the same RPO code (RDI) as the previous version, and is offered as an LPO-level (dealer-installed) extra. Pricing is set at around $145.

The new GM Keyless Entry Keypad will be offered on select 2020 model-year vehicles, including: