The 2020 Corvette C8 Coupe officially shed its camouflage back in July in a highly publicized debut event in Tustin, California. However, now that the reveal is several months in the past, it can be easy to forget all the prototypes and development that got us the first-ever production-ready mid-engine Chevrolet Corvette. However, this recently posted video provides a good look at the less-polished side of the story, as it features a dismantled C8 Coupe prototype.

Posted by YouTube user Drive 615, the video clocks in at two minutes, 41 seconds, with footage captured outside the factory in Bowling Green, Kentucky, where the Chevrolet Corvette is built. Apparently, the video host was on location in search of a 2020 Corvette decked out in Accelerate Yellow paint, but he found this dismantled prototype instead. 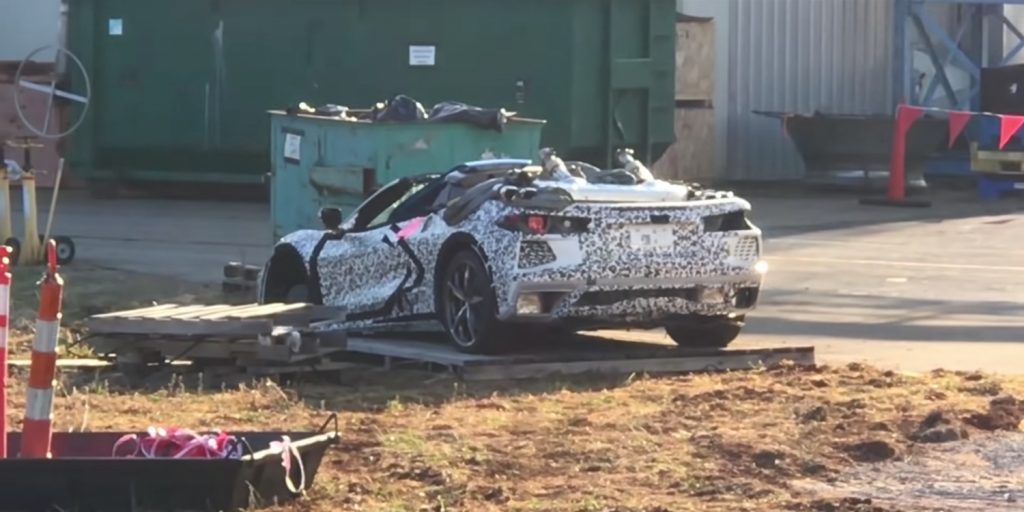 The video includes a few different views of the dismantled 2020 Corvette, including both a profile shot and rear three-quarter shot. The car is still covered in the all-too-familiar black-and-white camouflage, while the driver’s side front wheel is missing as well. The rear engine cover is gone, as is the roof. There also appears to be a muffler lying on top of the vehicle, towards the rear.

Seeing this dismantled 2020 Corvette reveals a new side of the sports car that we don’t see all too often, namely the dirt-under-your-fingernails development and prototyping process. It’s a major diversion from the glossy, polished, auto-show-ready side of the C8 we’ve covered a number of times before. Check it out below:

Note that the host of this video calls this particular vehicle a wrecked 2020 Corvette Convertible, speculating that the car was used in crash testing. However, YouTube user Drive 615 later updated the post to say that what we’re looking at is actually a C8 Coupe that was later dismantled.