Chevrolet just revealed the new 2020 Corvette Convertible a few days ago at the Kennedy Space Center Complex in Florida, but the new mid-engine droptop Vette wasn’t the only spectacle on hand. The Bow Tie brand also took the opportunity to drop one helluva surprise – the new Chevrolet Corvette C8.R race car! We were on the scene to witness the big debut firsthand, and managed to snag some video of this sexy performance machine dipping into the loud pedal.

Long story short, the new Corvette C8.R sounds incredible. At just over a minute in length, our video includes footage of the moment the C8.R first rolled onto the stage, as well as some footage of it sitting parked after the event had concluded. In both instances, the new mid-engine racer revs and flexes for the crowd. Behind the wheel is pro racing driver Tommy Milner of Corvette Racing fame.

“The C8.R is much more than just a race-tuned version of the 2020 Corvette Stingray,” said Chevrolet U.S. vice president of Performance and Motorsports, Jim Campbell, in a press release. “It’s a culmination of many years of testing and development between GM Design, Propulsion, Engineering and the Corvette Racing Team.”

Slated to replace the front-engine Corvette C7.R, the new Corvette C8.R will make its competition debut at the 2020 Rolex 24 at Daytona. While the No. 4 C8.R is draped in a silver livery inspired by the 1959 Corvette Stingray Racer and 1973 Chevrolet Aerovette, the No. 3 sister car will sport the traditional Velocity Yellow livery.

Of course, the really big news here is what’s going on under the hood. Chevy officials were tight-lipped on details, but rumor has it the Corvette C8.R is powered by a new DOHC 5.5L V8 with a flat-plane crank, as evidenced by the wild exhaust note this thing makes.

We’ll have more info on the racer’s engine in a follow-up post later, but for now, hit that play button and bask in the unadulterated internal-combustion pleasure that is the Corvette C8.R. 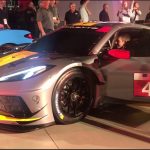