The Corvette C8.R completed its first laps of a race track in public this weekend, turning in demo laps at Road Atlanta before the start of the Motul Petit Le Mans on Saturday.

The new mid-engine GTLM race car, which is powered by a naturally aspirated, dual-overhead-camshaft 5.5-liter V8 with a flat-plane crank, won’t compete in its first race until 2020, but Chevy was eager to show its latest creation off to Corvette Racing fans in attendance at Road Atlanta, so it sent the car out for two laps with American driver Tommy Milner behind the wheel. 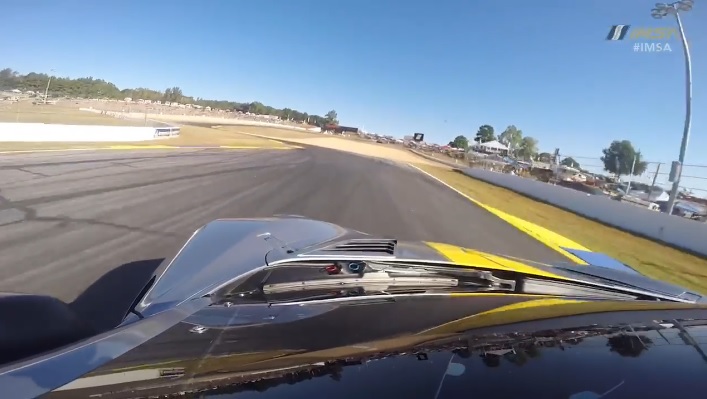 Now IMSA has released an onboard video of the run via its various social media channels, giving us a great look at the car attacking the 12-turn, 2.54-mile road course. More importantly, the video allows us to hear what the new 5.5-liter V8 engine sounds like under acceleration and on the overrun under braking. We’re happy to report it sounds great—though we will miss the earth-shaking, chest-thumping sound of the old 5.5-liter pushrod motor.

Chevrolet was still being quite secretive with regard to the Corvette C8.R, sending Milner out in the silver and yellow display car with the windows still fully tinted. Even the windshield had limousine-style tint applied to it, shielding the interior of the car from the prying eyes of rival teams at Road Atlanta.

As we reported last week, the higher-pitched 5.5-liter DOHC V8 will find its way into the road-going C8 Corvette Z06. It’s not clear how much power it will make in the application (the race car is limited to 500 horsepower, as per the IMSA/FIA rulebook), but we’re assuming Chevy is aiming for the C8 Corvette Z06 to have a higher output than the 650-horsepower, C7 Corvette Z06. The latter featured a 6.2-liter supercharged LT4 V8 engine and was available with both a seven-speed manual transmission and an eight-speed automatic transmission.

The Corvette C8.R starts life at General Motors’ Bowling Green Assembly Plant in Kentucky, where the mid-engine chassis (the same one that underpins the road car) is built and sent to Pratt & Miller for the racing engine, transmission and various racing accessories to be installed. The previously ran front-engine Corvettes weren’t as closely related to the road-going car as the C8.R will be.

Watch the Corvette C8.R lap Road Atlanta in the video embedded below.