You gotta give it up for the Chevrolet C10. These iconic pickups are just undeniably cool, inspiring enthusiasts the world over to put their own spin on the classic square-body style. Carlos is one such diehard, as evidenced by this fresh ’n clean Stepside he recently drove up from Tijuana to pay a visit to the Hoonigan Burnyard. You can probably guess where this is headed.

The truck in question is a 1979 Chevrolet C10, and first impressions are on the up. The body looks nicely finished, and was apparently resprayed in its original orange paint color, resulting in a very clean aesthetic. Not too many rough edges on this one. The same can be said of the Chevrolet C10 interior. Again, nothing terribly fancy to see here, just a well-executed, tasteful pickup cabin, with new weather stripping, refinished dash, and rubber mats. Under the hood, Carlos decided to swap in a 6.0L LS V8 plucked from the engine bay of a 2003 GMC Yukon. Once again, the owner kept things simple and clean, throwing on some new headers and an intake, while also adding a retune to make the most of it. Sending the power to the rear wheels is the 4L80 four-speed automatic transmission. After the Hoonigan boys pour over the details on Carlos’ Chevrolet C10, it’s time to get get down to business. Per tradition, Carlos hops behind the wheel, fires up the ‘eight, and plants his foot to the floor. The result is a gratuitous disregard for all things rubber, with a positively monster burnout that just won’t let up. Carlos swings his Chevy in wide arcs around the Burnyard, looping the square body around as the rear end pours out smoke.

We won’t spoil the ending, but long story short, Carlos refuses to let up, and neither does the pickup. 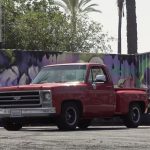 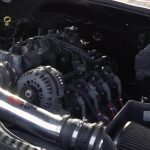 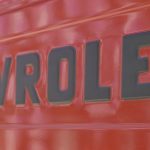 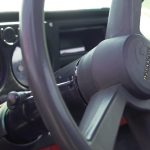 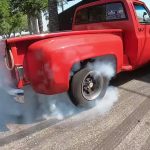 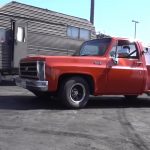