Earlier this month, a prototype for the upcoming Ford Mustang-inspired electric crossover, which may receive the Mach-E name, was spied leaving General Motors’ Milford Proving Ground test center in Michigan—a potential sign that GM and the Blue Oval are collaborating on EVs in an attempt to bring the fight to Tesla and other brands with performance-focused, battery-powered crossover offerings.

It’s still unclear why the Ford Mustang-inspired electric crossover paid a visit to Milford, but this week alleged CAD drawings of the crossover leaked online via the All Car News Facebook page, bringing the production version of the EV into focus. All Car News also drew up some renderings of the electric crossover based on the alleged CAD leaks, showing off the vehicle’s Mustang-inspired front fascia and Mustang taillights.

We know GM is working on a new electric crossover in the way of the Bolt EUV, but our intel suggests it will be a family crossover rather than a Tesla-fighting performance model like the so-called Mach-E. The Mach-E will also be RWD, while the Bolt EV and the EUV are/will be FWD. While the aforementioned spy photos could be a sign that GM is tapping Ford to help it bring a fully electric performance crossover to market, we are still left wondering if GM will indeed have an answer for the Mach-E one day. 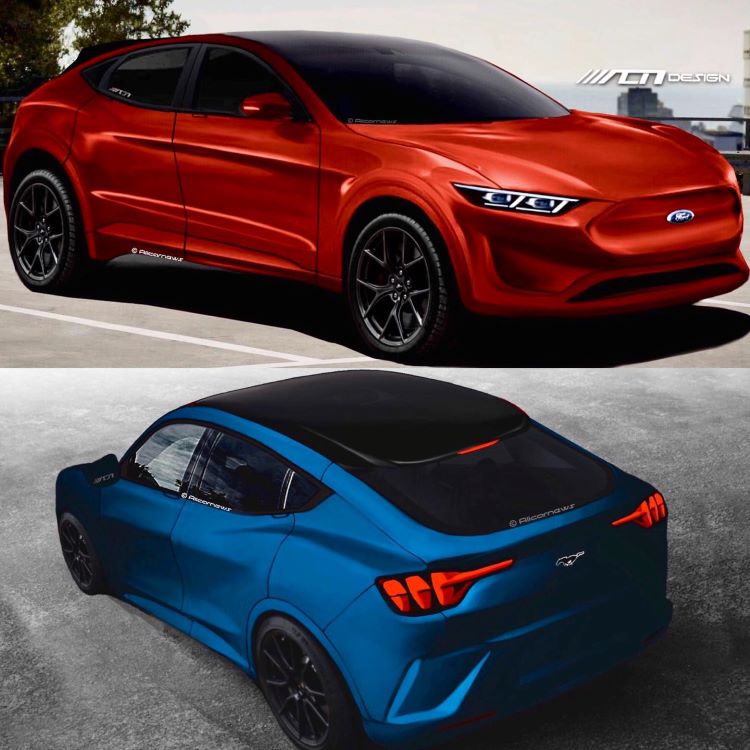 GM’s national agreement with the UAW will see the automaker allocate production of a series of new electric vehicles to the Detroit-Hamtramck plant in Metro Detroit, but rumors indicate the BT1-based electric vehicles set to be built there won’t really be rivals for the Mach-E. GM has already said Detroit-Hamtramck will build an electric pickup truck (expected to fall under the GMC brand) and media reports suggest an electric Hummer SUV and an electric Cadillac crossover are also in the cards. While we wouldn’t be surprised if the Cadillac EV had a good amount of performance on tap, it will likely be priced well above the Mach-E, as it will be a luxury vehicle.

Our sister publication Ford Authority says the Mach-E will have a maximum range of around 300 miles. Bill Ford has also said the vehicle will “go like hell,” so the high-performance nature of the crossover isn’t just a rumor—it’s been confirmed by Ford. It’s not clear how much it will cost, but in our opinion, the automaker can’t justify charging too much for it, seeing as the wickedly fast Tesla Model 3 Performance starts at less than $50,000.

Subscribe to GM Authority for more Chevrolet Bolt EV and Bolt EUV news and around-the-clock GM news coverage. Oh, and if Ford is more your speed, then check out our sister publication, Ford Authority.