General Motors describes the Corvette C8.R as its first clean-sheet factory Corvette race car since the C5-R was introduced way back in 1999. The Corvette C6.R was an evolution of the C5-R, while the C7.R picked up where the C6.R left off. While each of Corvette Racing’s front-engine challengers was quite a bit different than the last, GM didn’t stray very far from its race-winning formula between 1999 and 2019, with all three cars using a pushrod V8 motor (of varying displacements) and a front-engine, rear-wheel-drive steel monocoque.

The C8.R is not at all like the three cars that preceded it, however. It has a 32-valve dual-overhead-cam V8 motor with a flat-plane crank, which is mounted midship in the car. It is also more closely related to the actual production Corvette than the C5-R, C6.R and C7.R were, with its chassis starting out life at the Bowling Green Assembly plant before being shipped over to Pratt & Miller to be turned into a GTE-spec race car.

GM says the C8.R “shares the highest percentage of parts between the production and race car than any previous generation” Corvette Racing car, describing it as a true production-based racer designed to get the maximum out the vehicle’s new mid-engine platform.

But the C8.R wouldn’t be here if it wasn’t for the success of its forefathers. The C5-R, introduced under FIA GT rules in 1999, featured a 6.0-liter V8 engine loosely based on the production LS1 engine and built by Katech, which was paired with a five-speed manual transmission. However, GM later switched the engine for a larger 7.0-liter Katech-built engine, and eventually implemented a more advanced six-speed manual transmission as well.

The C5-R’s bodywork changed over the years, too, as GM sought to keep the car competitive among increasingly strong GT rivalry. All told, the C5-R carried Corvette Racing to an incredible 31 American Le Mans Series wins between 1999 and 2004, along with a victory at the 24 Hours of Le Mans in 2001.

The C6.R, meanwhile, was introduced for the 2005 racing season as a GT1 car. An evolution of the C5-R, it too featured a Katech 7.0-liter pushrod V8, but paired with a more-advanced sequential six-speed transmission (a sequential paddle-shift was added in 2011). It was even more successful, carrying the team to 39 GT1 race wins in the ALMS series and three GT1-class wins at the 24 Hours of Le Mans in 2006, 2007 and 2009. 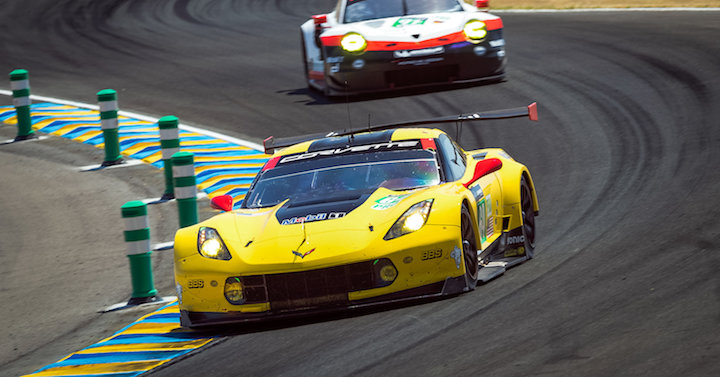 Another evolution of the car that came before it, the C7.R introduced new safety technology and improved upon the aerodynamic foundation set forth by the C6.R. It carried Corvette Racing to 17 wins during its five-season tenure, including a Le Mans win in 2015. Corvette Racing wanted to send the C7.R off with a victory in its final race, but the No. 3 and No. 4 entries crossed the finish line fourth and seventh place in class after lacking the pace of the front runners.

That didn’t stop the No. 4 team from pulling a massive burnout on the cooldown lap when the race was over, giving Chevy fans something to remember the iconic race car by. You can see the burnout in the video embedded below, courtesy of a fellow Corvette Racing fan.