The Corvette C7.R is world-famous for the thunderous noise emitted from its 5.5-liter pushrod V8 engine. There’s no other GTE car that sounds even close to the Small Block-powered Vette, which, as anyone who has seen an IMSA or FIA WEC race live will attest, almost feels as if it’s about to cause an earthquake as it approaches your grandstand.

By comparison, the Corvette C8.R and its new 32-valve, dual-overhead-cam V8 emits more of a high-pitched wail. The flat-plane crank motor is quite large compared to a Ferrari or McLaren engine, for example, coming in it at 5.5-liters—the maximum allowed size for the GTLM/GTE class. It’s not quite as high pitched as those European exotics, but it certainly doesn’t emit a “traditional” Corvette noise, either. 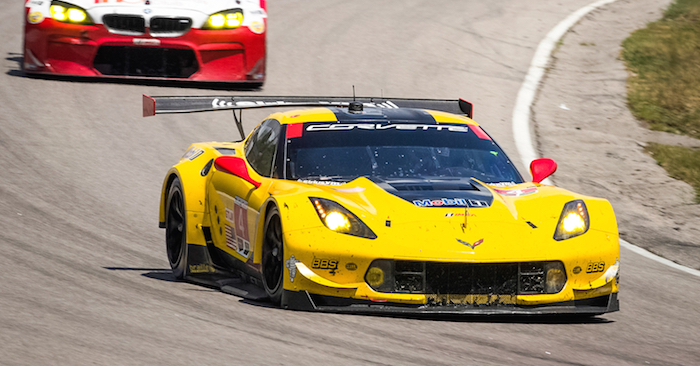 To demonstrate this difference, a Corvette Racing fan put together a video comparing the noise of the Corvette C7.R and the Corvette C8.R back-to-back. The footage was filmed as the cars sped through the same section of track, the downhill esses at Road Atlanta, and there are no other cars in the direct vicinity to drown out either car’s exhaust notes. Oh, and if you’re wondering how they managed to shoot footage of the Corvette C8.R on track already, Chevrolet rolled its new mid-engine racer out for a couple of demo laps before the start of Petit Le Mans earlier this month.

Check out the video embedded below for a direct, back-to-back comparison of the respective engine notes of the Corvette C7.R and the Corvette C8.R. We think one of the fans standing next to the camera really says it all when they ask if the car on track is a Ferrari and is then shocked to find out that it’s actually the new Corvette. The sound sure is different, but as long as the C8.R can win, we think Corvette Racing fans will be happy with what Chevrolet has created.