With up to 350 horsepower on tap thanks to the front-mounted, naturally aspirated, 5.7L LS1 V8, the Chevrolet Corvette C5 Coupe can be an absolute blast behind the wheel. However, like any car, the C5 can also be very dangerous in the wrong hands, as evidenced by the erratic driving seen in this video.

The video was captured in San Antonio, Texas by a woman who followed the Chevrolet Corvette as it weaved its way around town. On October 1st, around 1 p.m., the woman shooting the video spotted the yellow C5 driving erratically, at which time she pulled out her phone. 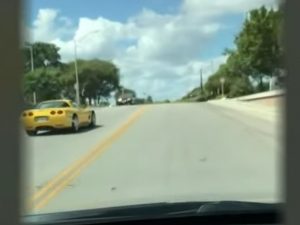 In the video, we see the Vette flitting between the lanes, seesawing back and forth. The driver later accelerated up a two-lane road in the wrong direction, narrowly missing a car at the crest of a hill.

Later on, the Chevrolet Corvette pulled into a parking lot, hitting a white Nissan in the process.

The witness proceeded to confront the man with her video still recording, asking him if he was having some trouble. The driver, who can be seen struggling to walk, was apparently unaware that he had hit another car while pulling into the parking lot. 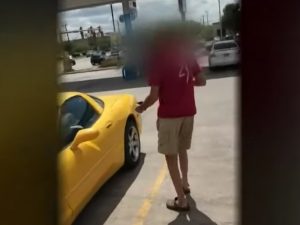 The man then left to get a haircut at a nearby salon, after which police arrived and he was taken into custody.

It’s unclear at this time if the man will face charges, or why he was driving so erratically. Thankfully, no one was hurt during his dangerous trip to the salon.

Authorities added that if you suspect another driver to be operating a vehicle under the influence, it’s not recommended that you follow them. Instead, make note of the make, model, color and license plate of their vehicle, and call 911.