Supercars driver Macauley Jones hit the wall in his Brad Jones Racing Holden Commodore during practice for this weekend’s Bathurst 1000, and while practice crashes ahead of the Bathurst 1000 aren’t uncommon, the relatively small impact caused some peculiar damage to Jones’ car.

Jones hit the outside wall at The Cutting section of Mount Panorama after losing the tail of the Commodore, slapping the right rear against the barrier. The impact damaged the bumper and collapsed the wing, but in an odd twist, it also peeled the roof of the car, opening it up like a tin can.

“It didn’t feel like it went in that hard, just slowly lost the rear and then tapped it,” he told Motorsport.com. “It looks a lot worse than what I think it is, there’s no suspension damage, just panel work, really, and for some reason the roof took a lot of it.”

Jones is in the wall! ?#VASC #Bathurst1000 pic.twitter.com/E2b0klWHey

Triple Eight Holden driver Jamie Whincup lead the way in the session, turning in a fastest lap of 2:04.674s. However, that paled in comparison to the later time set by the DJR Team Penske Ford Mustang entry of Scott Mclaughlin. He has been the man to beat all season long in the top-level Australian racing series, and smashed the practice lap record with a blistering time of 2:03.77s—0.06s quicker than his previous fastest lap, which he set in a Ford Falcon in 2017.

“I had a lot of fun,” McLaughlin said after setting the lap. “Hopefully tomorrow, the rain stays away and we can have another crack.” 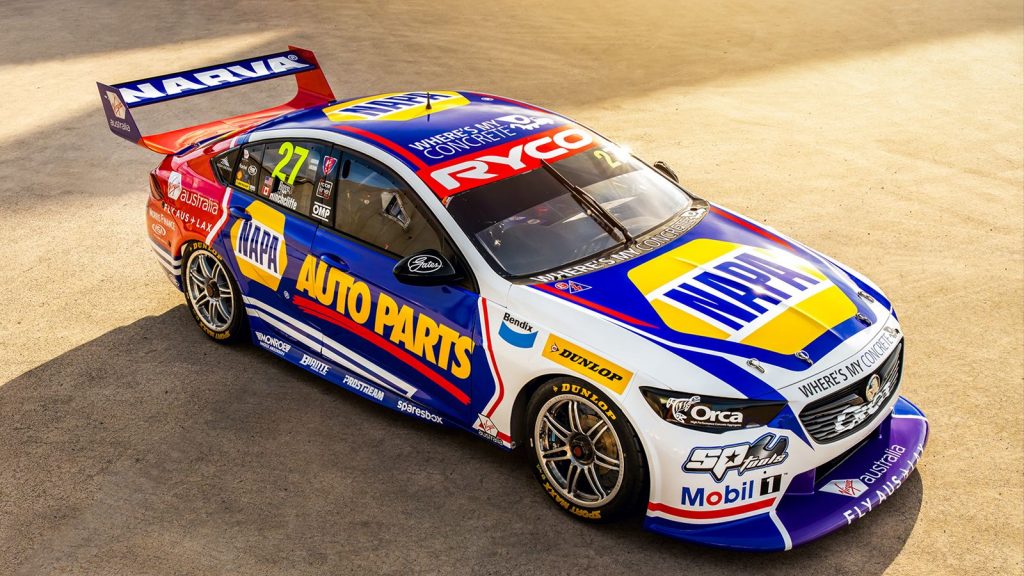 The Holden Rossi and Hinchcliffe will share this weekend

IndyCar stars James Hinchcliffe and Alexander Rossi, who are sharing a Walkinshaw-Andretti-United run wildcard entry in the race, finished toward the bottom of the timesheets in Thursday’s practice sessions, but are hopeful they can find a better pace on Friday.

Supercars drivers will take to the track twice more on Friday in a pair of practice sessions before qualifying later that night. The race is set to go green on Sunday, September 13 at 11:30 a.m. local time.