The 2020 Corvette C8 is the very latest evolution of the Chevrolet Corvette nameplate, bringing an all-new mid-engine platform to the traditionally front-engined sports car. With this major generational change comes a host of other little details, including an evolution of the Corvette’s famous crossed flags logo. The latter has evolved over the years, changing with each successive generation of Vette, and the latest mid-engine Corvette logo offers a narrower, more angular design than that of the Chevrolet Corvette C7. Now, we’re pinpointing a few hidden locations where these logos can be found on the 2020 Corvette, including in the cabin’s central speaker and the rear window. 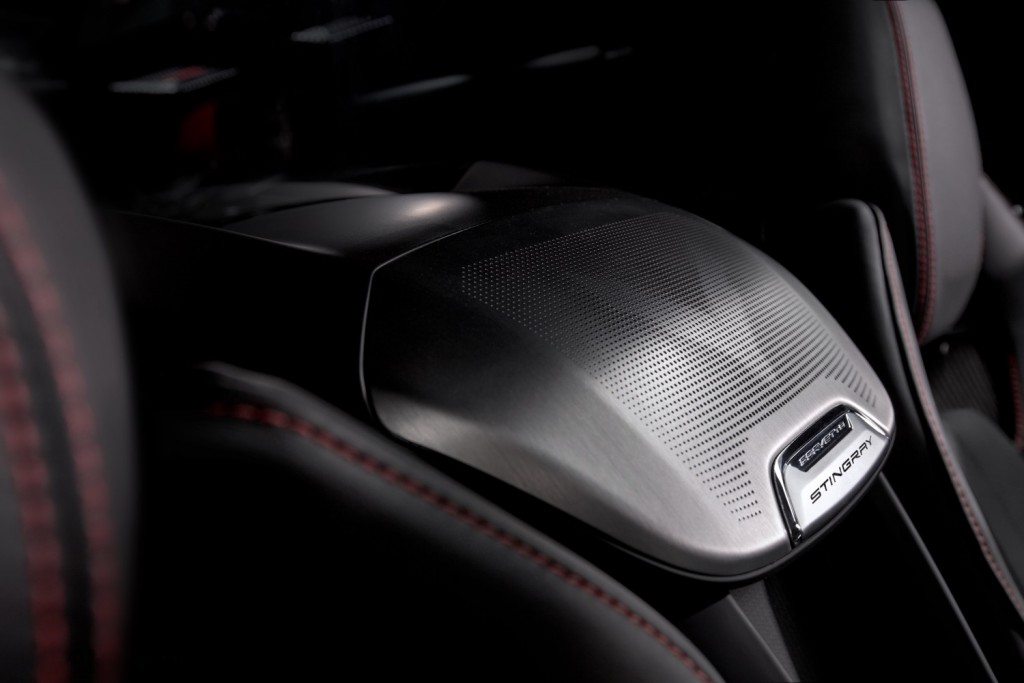 First, let’s look at the speaker mounted between the seats. As we can see, the holes in the speaker cover create a vague outline of the famous crossed flags logo, with a sort of Y-shaped design. Interestingly, this logo can only be seen from certain angles, making it hidden to the casual observer.

To note, the 2020 Corvette offers the best sound system Bose has ever equipped in a two-door sports car, with no less than 14 speakers scattered around the cabin.

Moving outside the vehicle, we find additional crossed flag logos adorning the upper portion of the rear window, close to the rear-facing HD Rear Vision Camera. The logos trickle down in a fading pattern, and are quite small, so anyone looking will need to get up close to the vehicle to actually make them out. It’s an interesting detail that adds even more spice to the view of that mid-mounted 6.2L V8 LT2 engine.

Interestingly, a similar feature was included in the Chevrolet Corvette C7, so we wouldn’t be surprised to see this on all Corvette coupe models going forward. Assuming they have some rear glass to accommodate it, unlike the 2020 Corvette convertible that was revealed on October 2nd.

We’re sure there are plenty of other little hidden details to be found with the 2020 Corvette, and we’re excited to discover them all. If you know about any special hidden logos or other cool features that aren’t well-known, make sure to drop them in the comments section, and don’t forget to subscribe to GM Authority for more mid-engine Corvette news, Corvette C8 news, Corvette news, Chevrolet news and 24/7 GM news coverage.