The C4 Corvette represented a real turning point for the Chevrolet sports car, making the ideological move from being a straight line rocket to one with agility and handling prowess. Even so, that certainly did not and does not prevent the Corvette from doing something very in line with the typical muscle car agenda: burnouts.

The vehicle seen in the video below, shot at the recent 2019 Corvettes at Carlisle event, is a 1988 Corvette Challenge race car, one of 56 in existence. The Corvette Challenge is arguably the perfect encapsulation of the C4 thanks to its ability to out-handle just about any other sports car of the era. The story goes something like this: back in the 1980s, the C4 Corvette dominated motorsport competitions, particularly SCCA Showroom Stock racing. Chevy’s sports car ended up taking so many wins in its class, that the cars were banned from the series. In response to the ban, an enterprising racer – John Powell – began another racing series called the Corvette Challenge.

These Corvette Challenge race cars were shipped from GM with the bespoke B9P RPO code, which designated them as being for racing use. That code meant all 1988 Corvette Challenge cars got the 5.7L L98 V8 engine good for 245 horsepower, the Doug Nash 4+3 manual transmission, and the Z51 handling package. The B9P Corvette cost $33,043 in 1988.

From there, the cars were shipped to Protofab, a race prep shop in Wixom, Michigan, where they received a $15,000 Corvette Challenge-specific upgrade package that included a roll cage, fire suppression system, racing bucket seats, Bilstein race shocks, and a competition wheel and tire set, among other upgrades. All of the cars were identical, as per spec class racing regulations. Today, you may now know Protofab as Pratt & Miller, the folks responsible for building and running the Corvette Racing race cars. 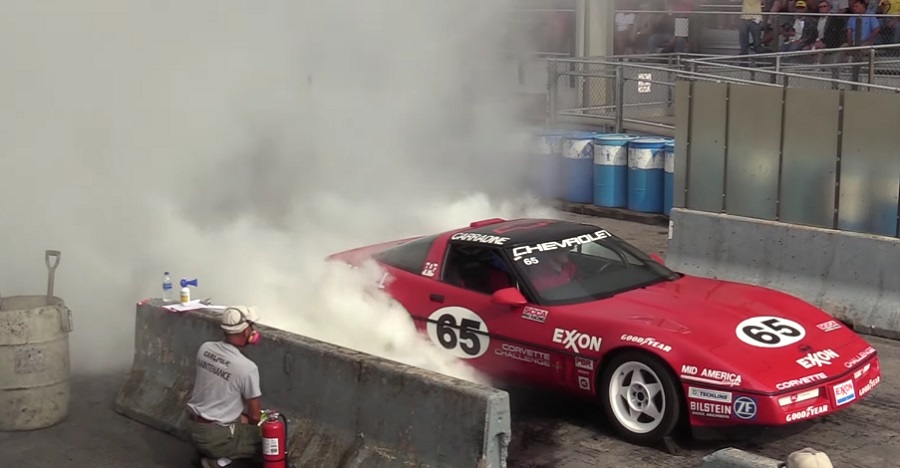 Naturally, being race cars, few C4 Corvette Challenge cars have survived over the years, so seeing this one do a massive burnout is truly a sight to behold. In the video, Carlisle Events co-owner Lance Miller, unleashes a mega burnout in the No. 65 Corvette, seemingly without any trepidation of the car’s rare nature as he bangs off the rev limiter until the entire crowd is obfuscated in tire smoke.

Indeed, car number 65, which was once owned by Revenge of the Nerds star Robert Carradine, was never a garage queen, and Miller sure as heck doesn’t treat it like one. We can’t think of a better way to pay tribute to the car’s heritage than a nice smoky burnout, so watch and enjoy: