The third-generation Chevrolet Camaro was a badass looking ride back in 1982, and it has a certain retro appeal about it that has carried through to the present day. However, there’s always room for improvement, right? Well, YouTube channel The Sketch Monkey thought it was something worth playing with, despite the host’s professed love for the Europe-meets-America design of the car. His goal was to preserve the overall shape of the third-gen Camaro while bringing the car into the modern day and age.

With Photoshop fired up, it’s time to get going – and The Sketch Monkey recorded the entire process in this video, available below. The host starts with the front end, which has changed considerably in nearly 40 years of the automobile. The third-gen has a NASCAR-inspired front clip with minimal radiator and grille openings, so opening that area up is the first design choice. He places a grille opening between the headlights that is distinctly cribbed from a contemporary 2019 Camaro. Add in the obligatory fanged look to the bumper cover and a smoother hood profile, and that’s the front end design figured out. 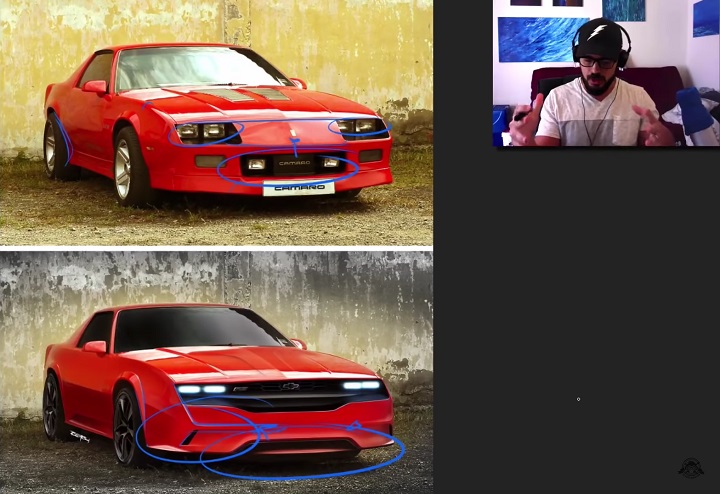 Of course, the front end is just one element to a car’s design, and the side profile of the 1982 Chevrolet Camaro lacks the distinct, crisp body lines that one would see on a new car, particularly a modern-day Chevrolet sports car.

The same idea follows along through the doors and quarter panel, which on the third-gen Camaro are all broad, relatively flat panels with little distinction other than the molded fender flare over the wheel openings. A modern muscle car, by comparison, would tuck in down low, near the side skirt, and then flare out at the quarter panel, giving the car much more pronounced hips.

The overall effect is just cool. It looks almost like a revisionist take on the Knight Rider, which was based on the Camaro’s cousin, the Pontiac Trans Am. Our only gripe on this excellent “car makeover” is that we don’t get to see what would change on the rear end of the 1982 Camaro… but maybe time.