Sports cars are meant to be driven and enjoyed. However, everyone has a different idea of how to drive and enjoy their cars. Some people hit up the local Cars & Coffee, while others like to blast through a winding road or hurtle down a race track. Then, there is Sascha, a Denver, CO local that also goes by his Instagram personality as dropout_c7. As his name implies, Sascha drives a C7 Corvette Stingray… and, man, does he seem to enjoy it.

This enjoyment tends to manifest itself in various driving antics, much of which involve smashing watermelons, whether it’s drifting around and, subsequently, into them, or even using a watermelon as a shift knob while doing high-speed freeway pulls.

Another common antic of dropout_c7, whose Stingray features a Lightning McQueen livery inspired by the films Cars, is hauling abnormally large objects around in it. The most famous of these is a couch that was strapped to the roof. More accurately, the couch is perched on top of the Corvette, seemingly stuck between the windshield frame and the rear hatch, with the removable roof panel removed.

Lest you think this is a joke, the aforementioned Instagram account features multiple shots and video clips of him driving around at speed with the couch perched atop the Corvette. 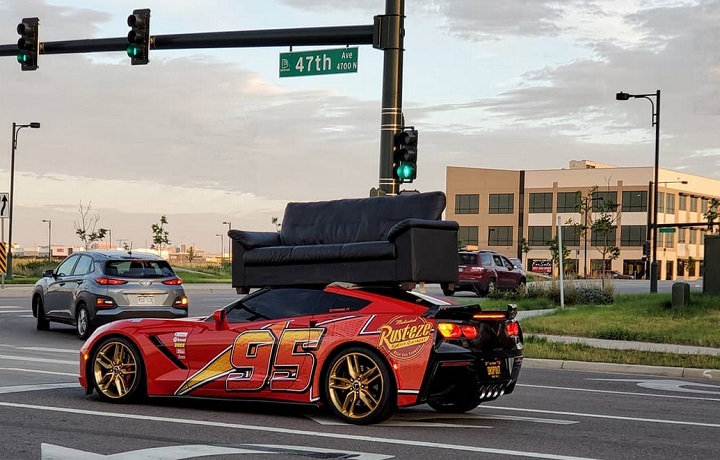 Some Chevrolet Corvette fans are bound to be upset by this seeming disregard for the well-being of his Chevrolet, while others might consider it as a very freeing thing to see. In fact, one could make the argument that too many people are far too precious about their cars, and fail to really enjoy them as much as they could be. And while we don’t encourage anyone to prop heavy furniture on top of a Corvette, this liberal attitude about enjoying the car, even at the potential expense of some scratches and scrapes here and there, is definitely a departure from the norm.

Enjoy the photos, and be sure to subscribe to GM Authority for more Corvette news, Chevrolet news, and 24/7 GM news coverage.