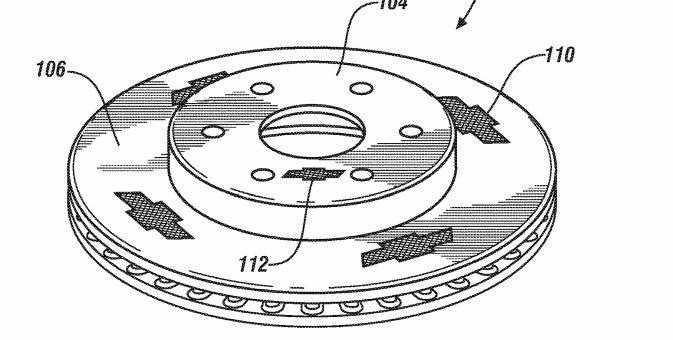 GM has filed a patent for a rather unique new brake rotor design for Chevy vehicles. The new Chevrolet brakes design includes no less than five individual Bow Tie logos, with four badges circling the disc and one added to the rotor hat.

While it’s certainly not uncommon to see a variety of different disc designs, including things like slotted or drilled rotors that offer better heat dissipation qualities on high-performance models, this is the first time we’ve seen brake rotors branded with an automaker’s logo.

The patent description provides a little more inside into the thought process here. According to the patent abstract, this particular filing “relates to a brake rotor having a decorative insert,” which is apparently “desirable to provide a method to effectively and lastingly mark components without adding prohibitive cost to the manufacturing process or compromising component quality.” No word on which vehicle, or vehicles, these new Chevrolet brakes are intended for. It’s an interesting idea, and while it’s possible this is for purely aesthetic reasons, we’re not convinced that’s the real motive behind the patent. After all, if it is just for aesthetics, why would Chevy add a Bow Tie badge to the rotor hat, the same spot that’s covered by the wheel when mounted on the car? It just doesn’t add up. Plus, how many damn badges does a car need these days, anyway?

No, this is almost definitely not for aesthetics. Rather, we think the real reasoning behind the Chevrolet brakes patent has to do with mechanics easily and quickly certifying whether or not a part is a genuine OEM piece, or if it’s a knockoff / aftermarket substitute.

But we’ll cover that in a follow-up post. In the meantime, subscribe to GM Authority for more Chevrolet news and around-the-clock GM news coverage.

Source: Car and Driver via the US Patent and Trademark Office