Unless it is to tell you GM is no longer planning a rival, the Ford Bronco is an unlikely topic to appear here on GM Authority. However, this is no ordinary Ford Bronco. That’s because its owner, Michael Cox, has ditched the Ford 302 V8 for a 6.0L LS V8 pulled from the GMT900-era Cadillac Escalade and made some pretty impressive mods along the way. However, after seeing what both the vehicle and its owner are up to at Hoonigan’s Burnyard Bash, the LS swap almost seems trivial. Almost.

Cox guides the Hoonigan team around the Bronco in as haphazard a manner as possible, saying that giving the tech talk on it would be “boring.” The Bronco owner’s lackadaisical attitude is all a joke, however, as both the vehicle and its driver mean business.

Beneath the kitten-lade camo wrap lies a serious off-road machine. A full roll cage lines the inside of the Bronco, and extends to the cargo area, where an expedition survival kit is bolted in. A fixture for a spare wheel, which is beadlocked, can also be seen. A deeper look into the rear of the vehicle showcases external reservoirs for the installed King off-road race shocks.

The aforementioned 6.0L LS V8 engine has an LS6 intake manifold upgrade, a mild cam and, interestingly, some of the wildest swap headers we have ever seen. They are flipped, tractor pull-style, and rise over the engine, before joining into a massive 8-into-1 merge collector, where the exhaust then routes forward, turns 180 degrees and exits on the passenger-side of the beast.

The GM V8 is backed by a beefed up GM 4L80E 4-speed transmission. Interestingly, Cox quotes it as producing “418 torque at the wheels,” while neglecting to mention horsepower… but 400 wheel-horsepower is a fair guess. He claims that the custom header setup, with its massive primaries, which snakes into the merge collector, gained 75 pound-feet of torque on the dyno compared to the stock manifolds. 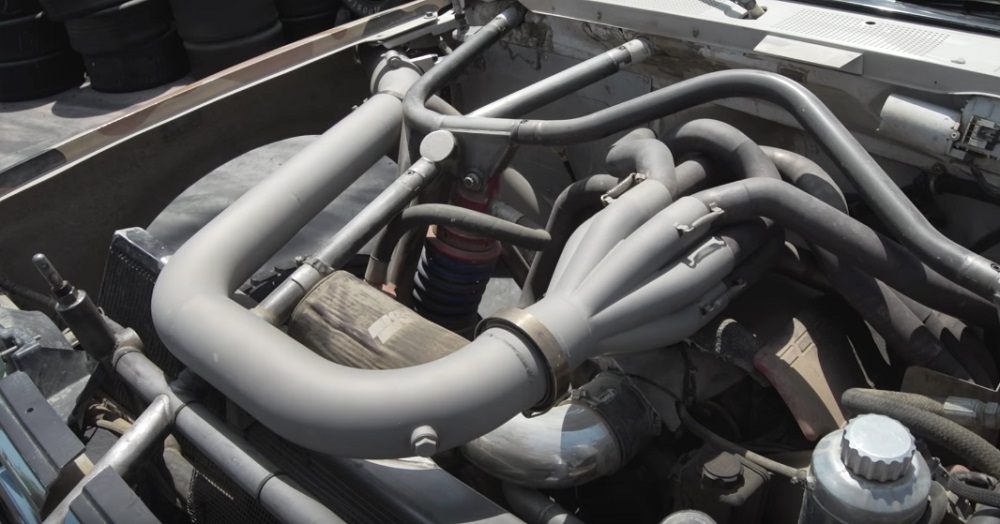 Cox built this Bronco to tear up the dunes, and, specifically, to do massive jumps. However, it’s pretty good at tearing up the pavement just as well. After heating up the tires with some donuts, Cox promptly crashes the Bronco nose-first into a shipping container, claiming the rear wheels have “too much traction.” For good measure, he crashes the Bronco, again, in almost the same exact manner after doing some more donuts. 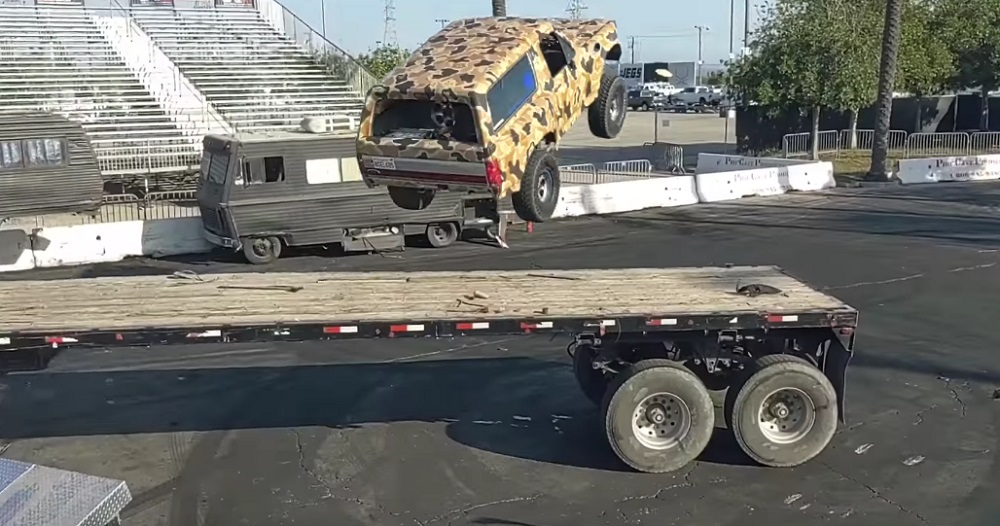 It’s all trivial to Cox, as this Bronco was built for hang time. So, ramps are set up and after a quick warm up, where the Bronco jumps over a big rig, the stakes are raised. Alex Gintani, an exotic car parts builder, offers up his McLaren 720S for Cox to jump over in the Bronco. Gintani lights up the rear tires of the McLaren super car behind the ramp and Cox’s Bronco clears him by a mile.

Subscribe to GM Authority for more Chevrolet news and around-the-clock GM news coverage. And for you fans out there, be sure to check out our rival sister publication, Ford Authority.