The Chevy Silverado has many uses like off-roading, towing heavy trailers and as a commercial vehicle doing pretty much any job. But we’ve never seen one jump off a ramp fitted with a giant tank of gasoline strapped to its back. But that’s precisely what BBC’s Top Gear did recently in an epic 360-degree video of a Chevrolet Silverado jumping over a petrol (gasoline) station.

The 360-degree video kicks off with a first-person view of the interior of a motor home. A man comes in, assesses that you’ve had “your last meal”, and brings you out to what appears to be your next stunt. Once arrived at your destination, after crossing the entire behind-the-scenes area at Top Gear, you are presented with what appears to be a GMT800-era Chevy Silverado fitted with an enormous tank behind the cab. 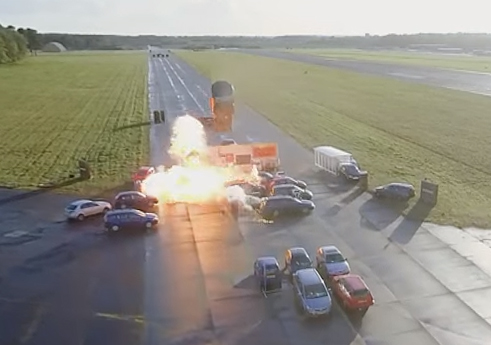 In order to add a bit of drama to the experience, you are informed that the tank hanging out the back of your stunt truck is actually filled with gasoline. That’s when you’re thrown behind the driver’s seat, and asked to wear a helmet that “that doesn’t seem to fit as well as the last one you wore.”

The curious bit about this video is the engine powering this Chevrolet Silverado stunt machine. The man that presents it to you states the engine is a 5.0L V8, but General Motors never manufactured such an engine for the GMT800 Silverado. Our guess is that it’s either powered by the GM 5.3L LMF V8, or the truck has been swapped with some other motor.

Either way, if you’ve always dreamt of jumping a Chevy Silverado filled with gasoline over a flaming gas station (and who hasn’t?!), then now’s your chance to do so in this super cool Top Gear 360-degree video, even though the stunt can appear cheesy at times. Oh, the Stig also makes an appearance in the performance.

And if you want to read about more Chevrolet Silverado trucks with actual GM engines underneath their hoods, then be sure to subscribe to GM Authority for more Silverado news, Chevrolet news, and around-the-clock GM news coverage.