With nothing but electrons to drive the rear wheels, the Chevrolet eCOPO Camaro is an utterly unique creation. However, despite the performance and remarkable powertrain, this EV dragster failed to sell at the Russo and Steele auction in Monterey, California back in August.

Estimated value for the battery electric dragster was set between $425,000 and $525,000, but the car didn’t change hands, as bidding failed to meet reserve. For reference, a rare Chevrolet COPO Camaro 50th Anniversary edition recently went up for sale on eBay with a buy-it-now price of $163,500.

While initial reports indicated that General Motors was consignor for the lot, it was later discovered that was not the case. As of this writing, the actual consignor is not known.

The eCOPO Camaro was a joint project between GM/Chevrolet as well as Hancock and Lane racing. It was introduced as a concept vehicle at the 2018 SEMA show. Making all the go is a quartet of 200-volt battery packs, which power two electric motors via a T400 automatic transmission and a full COPO Camaro drivetrain and COPO suspension.

Peak output is rated at 700 horsepower and 600 pound-feet of torque, which helps the racer to break into the nine-second quarter-mile range.

It’s interesting the eCOPO Camaro failed to sell, even considering the high estimated price. However, as Russo and Steele told Fox, it’s difficult to determine the car’s true value given how unique it is.

Though not the first electric Camaro in history, the eCOPO is the first and only all-electric sixth-gen Camaro. The vehicle was created as a tech showcase as GM moves toward an all-electric future, the eCOPO foreshadows things to come with regard to performance and all-electric powertrains.

So far, the eCOPO has recorded a time of 9.51 at more than 140 mph. And oh yeah, it’s also capable of some pretty massive wheelies, too. 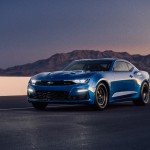 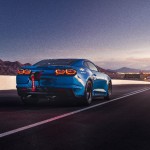 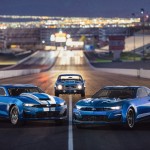 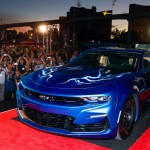 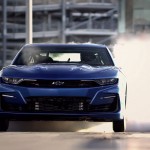