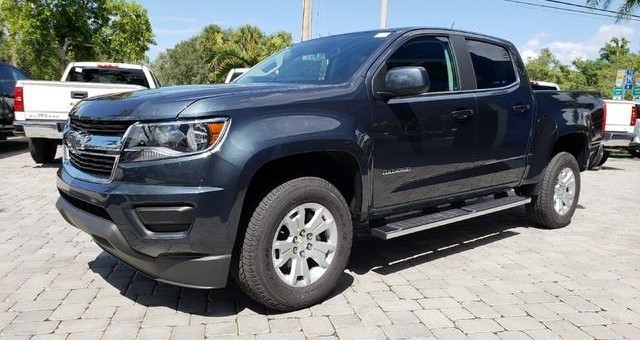 In the beginning of September, we took a close look at the Chevrolet Colorado, GMC Canyon and Ford Ranger, comparing the exterior dimensions of the pickup trucks to see how they matched up. And now, by popular request from our readers, we’re adding another contender to the mix – the Toyota Tacoma.

With a commanding 49 percent share of the midsize pickup truck segment in 2018, the Tacoma is definitely the model to beat when it comes to commercial success. The Chevrolet Colorado, by comparison, saw a 27 percent segment share last year, while the GMC Canyon saw a 6.7 percent share and the newly-released Ford Ranger forging ahead. So we are placing all four side-by-side in the following dimensional comparison post.

For reference, the Chevrolet Colorado and GMC Canyon offer identical exterior dimensions, so for the sake of simplicity, we’re lumping both together in this comparison.

Let’s kick things off with a brief look at what’s going on underneath the skin.

Both the Chevrolet Colorado and GMC Canyon run on the body-on-frame GMT 31XX platform, which was initially introduced as the bones for the international-spec second-generation Chevrolet Colorado/S-10, followed by the U.S.-spec 2015 Chevrolet Colorado and 2015 GMC Canyon. The GMT 31XX platform is also used to underpin various international-market models, such as the Holden Colorado, Isuzu D-MAX, and the Chevrolet Trailblazer SUV, also known as the Holden Trailblazer and Holden Colorado 7. Both rear-wheel-drive and four-wheel-drive drivetrains are on offer. As for the Ford Ranger, The Blue Oval brand’s segment entry utilizes the body-on-frame Ford T6 platform, which was initially launched back in 2011 for the then-new Ranger, and is also in use on Ranger derivatives like the Ford Ranger Raptor, as well as on the Ford Everest SUV. Looking ahead, elements of the Ford T6 platform are planned for use in the upcoming Ford Bronco, albeit in modified form. Like GMT 31XX, the Ford T6 Platform can accommodate either rear-wheel-drive, or four-wheel-drive. And that brings us to the Toyota Tacoma, which differs from the Colorado, Canyon and Ranger by offering a fully boxed frame up front and double C-channel frame in back, as opposed to the fully boxed frames on the three domestic trucks.

With the platform and frame covered, let’s dive into the exterior dimensions, starting with the GM Crew Cab, Short Box configuration.

While each of these three automakers have their own names for it, the configuration basically includes four full doors for ingress and egress, as well as a five-foot bed in back. Ford calls this the SuperCrew, Five-Foot box combo, while Toyota calls it Double Cab, Short Bed.

Of the four models listed, the Chevrolet Colorado and GMC Canyon are the longest, both in terms of wheelbase and overall length. Greatest overall width goes to the Tacoma by a tenth of an inch, while the Ford Ranger is the tallest of the bunch. The second half of our comparison looks at the GM Extended Cab, Long Box configuration, which adds extra length to the bed, while decreasing the size of the rear seat with rear-hinged half doors in the back. Ford dubs this the SuperCab, Six-Foot Box configuration, while Toyota calls it the Access Cab, Standard Bed.

With many of the exterior dimensions carrying over from the previous cab-and-bed configuration, we find many of the same results as well. The Chevrolet Colorado and GMC Canyon are once again the longest with regard to wheelbase and overall length, while the Tacoma barely takes the title of widest. Interestingly, this combo sees the Ranger drop a few tenths with regard to overall height, but the Ford truck remains the tallest of the four pickups listed.