With the 2020 Corvette C8 Stingray Coupe officially announced, the next mid-engine C8 variant slated for a debut is the 2020 Corvette Convertible. Previously, we knew the roofless C8 was due to arrive sometime in the fall, but now, according to Corvette Assembly Manager Kai Spande, we know Chevrolet is planning for a reveal in October.

Thanks to a video captured last week at the 25th Anniversary Celebration at the National Corvette Museum in Bowling Green, Kentucky, Spande let slip that the new 2020 Corvette Convertible was on track for a release “in the October timeframe.” Spande was engaged in a Q&A session following a series of presentations about the C8 and the General Motors Bowling Green Assembly Plant.

So far, we’ve seen the 2020 Corvette Convertible out on the street in prototype form, and as a teaser thanks to an official GM video last month. We had previously confirmed that the model would indeed come equipped with a convertible hard top, which is a major departure from previous Corvette Convertible models, all of which have been soft-tops up until the C8.

The big difference between the 2020 Corvette Convertible and its Coupe sibling can be found behind the cabin, where the roof section looks to fold down either under or over the engine cover. That means the transparent engine cover in the C8 Coupe is gone, since it’s replaced with new buttresses just behind the passenger headrests.

Standout features for the C8 Convertible include single-button operation to open and close the top, as well as the inclusion of the Rear Camera Mirror feature.

When it comes to comfort, a hard top is the preferable setup, as it lowers overall NVH levels inside the cabin. That said, hard top convertible configurations are typically heavier and more complex than soft-tops.

In addition to confirming the 2020 Corvette Convertible debut timeframe, the video also includes a number of presentations on the Stingray Coupe model, specifically about the exterior design, interior design and features, powertrain, and more information on the Bowling Green Assembly Plant as well.

Spande’s comments on the droptop can be found around the 59-minute mark. 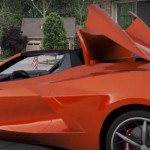 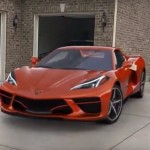 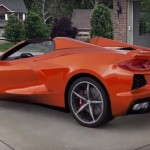