Restomod muscle cars allow enthusiasts to have the best of both worlds: the superior styling of cars from the 1960s and 1970s paired with the sophisticated engineering of a modern-day vehicle.

Buying or building a restomod isn’t the only way to marry retro styling with current day technology, though. Once upon a time, Rochester Hills, Michigan based company Advanced Automotive Technologies offered what they called the ’53-03′ kit for the C5 Corvette, which was a custom-made styling kit that gave the modern Corvette the front fascia, rear fascia and roof shape of the C1 1953 Corvette. 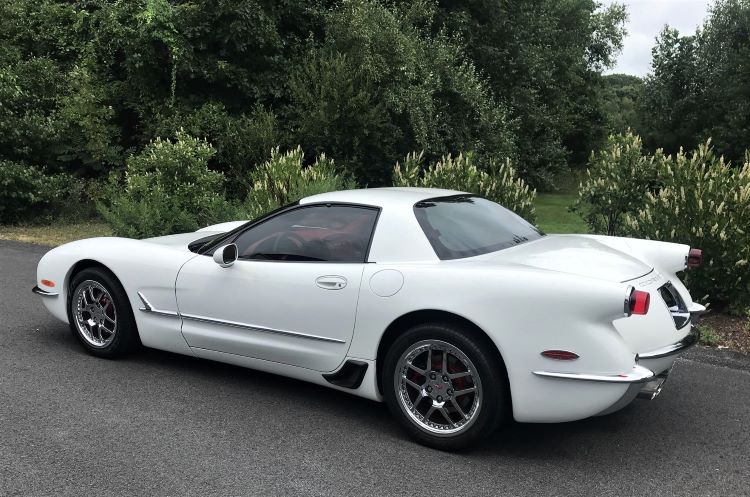 One of these rather rare AAT-built C5 Corvette conversions was recently listed for sale on Bring-A-Trailer. This particular car started out life as a regular 2004 Corvette Z06 before the vehicle’s second owner took it to AAT to have it converted into a 53-03. The styling conversion isn’t the only custom part of this build, either – it also has ProCharger centrifugal supercharger installed. The 5.7-liter LS6 V8 engine sends power to the rear wheels through a six-speed manual transmission.

This car was allegedly inherited by the seller through their late uncle, who was the one who had originally brought the car to AAT. It has just 2,4000 miles on the odometer – 16,000 of which were put on by the seller’s uncle.

Interestingly, AAT was started by Steve Pasteiner, a former General Motors designer who left the company to start the prototype/customization shop in suburban Detroit. Pasteiner also owns and operates the Pasteiner’s automotive hobby store in Michigan – a well-known meeting place for car enthusiasts in the Detroit Metro region.

Check out the listing for this oddball 2004 Corvette Z06 at this link and let us know what you think of it the comments down below. As of this writing, bidding on the car stands at just $13,000.