If you wanted to haul some dirt bikes around but didn’t want to spend a fortune on gas, what kind of vehicle would you buy?

If you were logical, you’d probably opt for something like a Chevrolet Colorado or one of its rivals like the Toyota Tacoma, but not all of us are so rational.

YouTube channel Hoonigan recently invited a friend out to their so-called ‘Burn Yard’ (their name for a patch of asphalt dedicated to roasting tires) who had a wild idea for hauling his two dirt bikes out into the county.

Instead of buying a smaller mid-size pickup, the dirt bike enthusiast in question decided to cut the rear roof section off of a Tesla Model S, removed the rear seats and give it a makeshift pickup bed – thereby giving him the world’s first ‘Truckla’ or ‘Teslamino’. We can’t imagine it’s very structurally sound, but it’s fast, fun, zero emission and can haul a couple of bikes with ease. 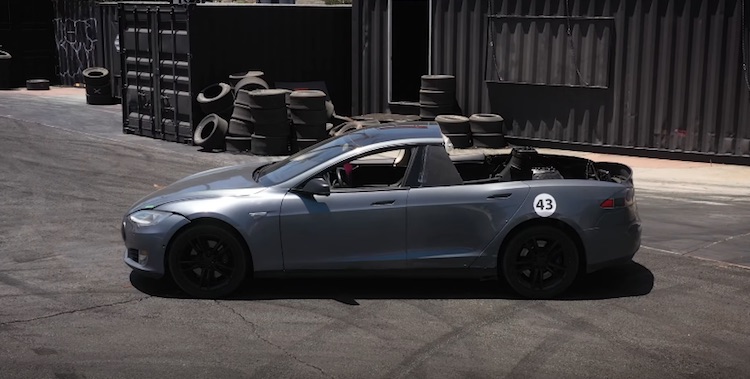 The Teslamino can also do smoky burnouts – though this will be no surprise to anyone familiar with the instant torque on offer from Tesla’s powerful electric motors.

If anything, this video just highlights the fact that there is demand for an electric pickup truck – though as we’ve noted in the past, EV trucks will be better suited to lifestyle buyers (like the individual that owns the Teslamino) rather than those who two or use their pickups as work vehicles. GM recently confirmed it was working on an electric pickup truck, though it’s not clear when it may go on sale or which of its brands it will fall under.

Watch the Teslamino burn its tires to the ground in the video embedded above.