If you’re a fan of General Motors‘ various racing endeavours and enjoy racing games, you will definitely want to check out the upcoming Grid game from Codemasters.

We briefly touched on the upcoming arcade racer when the developer dropped the first official teaser trailer for the game and announced that it would feature a Chevrolet Camaro touring car, the Corvette C7.R and the Cadillac DPi-V.R, among other GM race cars. Now gameplay footage of the title has been released showing the Cadillac DPi-V.R racing a field of identical cars on a fictional street track in Havana, Cuba. 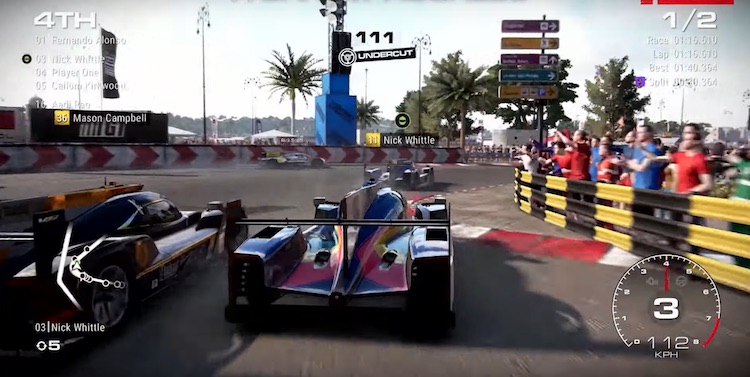 The gameplay footage, embedded above, gives us a good look at what an average race in Grid will be like. Towards the end of the video, the player bears down on Fernando Alonso, who will feature prominently in the game and will serve as the player’s main rival in the latter stages of the career mode. As you may already know, Fernando Alonso won the Rolex 24 at Daytona this past year in a Cadillac DPi-V.R that he shared with Japanese driver Kamui Kobayashi and IMSA regulars Jordan Taylor and Renger Van Der Zande.

The game will launch with four real-world street track locations: Barcelona, Havana (as seen in the video above), Shanghai and San Francisco. We’ve also seen a number of permanent road courses previewed including Brands Hatch and an unknown (and perhaps fictional) oval track and have heard point-to-point maps will be included as well.

Grid will launch in October, but for now, you can watch the Cadillac DPi-V.R and Fernando Alonso race on the Havana street circuit gameplay in the video embedded above.